Corn and soybean prices at the end of January proved to even the stingiest of bears that there are legs or strength to the current rally. Think back to November when it seemed all but certain that Brazil would indeed have record soybean production for 2022. Fast forward to the end of January as both old and new crop soybeans had numerous days of double digit gains, resulting in multiple new contract highs the last two weeks of January. The Jan. 12 monthly WASDE (supply and demand) Report had estimated Brazil’s soybean production at 139 million tons, down five million tons for a record decline. In the days that followed the USDA report, private analysts suggested the Brazil production could be as low as 129 million to 131 million tons of soybeans.

Two week weather forecasts for South America at the end of January indicated dry conditions for southern Brazil, northern Argentina, and Paraguay. Central and northern Brazil will likely see rains or even excessive rains in that same period. Those rains will be delaying harvest even further due to wet conditions much of January. The dry and wet areas as just indicated match weather conditions seen for much of December in those same areas. The combination of dry and hot conditions along with excessive rains is reducing yields on both fronts.

U.S. soybean crush margins are record setting on two fronts. First, in total value generated when crushing. Second, the component of soybean crushing is seeing a revolution that is industry changing. No longer are soybeans crushed just for the major end product, soybean meal. Additional soybeans are being crushed for oil, the minor byproduct of the crushing process. A 60- pound bushel of soybeans when crushed, typically yields 47 pounds of meal and 11 pounds of soybean oil. Soybean oil prices at the CBOT are record high along with world record prices for edible oils. For example, biodiesel (soybean oil blended with diesel fuel) is no longer record setting news. Current changing and record-setting is the ability to make diesel fuel 100% from soybean oil. In addition, refiners are now able to make sustainable aviation fuel (SAF) from 100% cooking oil, vegetable, and soybean oil.

Corn movement in January was brisk on two fronts. First, producers were delivering contracts made months earlier, often at lower or much lower prices than those seen in January. Second, they were selling additional corn as cash prices touched $6.00 to $6.30 the last two weeks of January. Train logistics crawled to an even slower pace with arrival often delayed and later than expected. It resulted in days or longer when an elevator was plugged, disappointing producers who wanted to take advantage of good weather days. January weather can either be near perfect or not so perfect when cold and snow delay trucking for days or weeks.

The next three months or longer will see wide ranging price days for corn and soybeans. Price volatility will be even more extreme than that of the past six months. Numerous events anticipated along with surprises will contribute to the volatility. 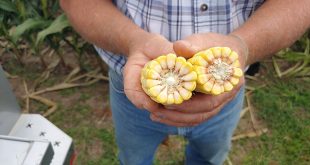 Will corn test $7 or is a return to $6 a more likely outcome?

By Jon Scheve, Superior Feed Ingredients, LLC There are many factors that could impact corn …