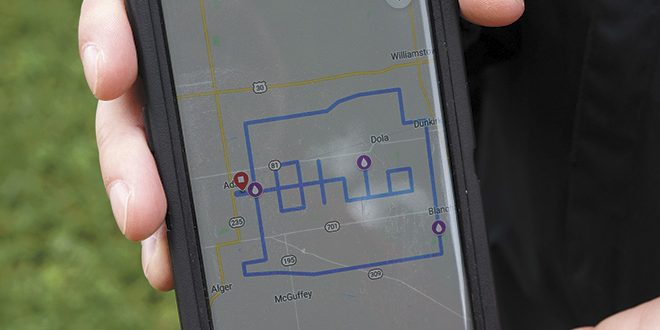 Participants in the Cursive Ohio ride choose from among courses that trace all or part of a handwritten "Ohio." Photo by Mitch Moser, CFAES.

Riding for farmers who cannot

Not more on the actual day in 2016 he finished Ohio’s half Ironman race, the Ironman 70.3 Ohio. On that day, he needed sleep and a lot of food. But weeks after getting to the finish line, he wanted to do a group ride with some of the people he bonded with along the course. People who swam and biked and ran alongside him.

“You’re near death in the last leg of a triathlon, so you meet a lot of people,” he joked about the grueling experience.

A few months after the triathalon, Heil organized a bike ride near his northwest Ohio farm in Kenton. And just to make the ride really interesting, he mapped out a course that would form a handwritten “Ohio.”

Using a Garmin app, he clicked around.

“I started looking at the roads to try to figure out where I could put an ‘Ohio,’ where it would actually work. It took me a few weeks,” said Heil, a 2009 graduate of The Ohio State University College of Food, Agricultural and Environmental Sciences (CFAES).

Heil succeeded and “Cursive Ohio” was born. A handful of people showed up the first year for the bike ride that winds among Hardin County’s corn and soybean fields. The next year, he turned the ride into a fundraiser for research and treatment for cystic fibrosis, an illness two of his cousins have.

Held the Saturday before Labor Day, the ride has been going on since then with a few changes to the course. In recent years, Heil added some shorter options for casual riders. Now, participants can choose to ride 17, 35, or 64 miles. The 17-mile course goes through just the ‘O’ and ‘h’ and dots the ‘i.’ Riders who take the 35-mile and 64-mile route get to trace ‘Ohio,’ and the 64-mile riders add a little extra on afterward.

The 2021 ride raised money for Ohio farmers who are injured. Proceeds from the ride now fund a program called Ohio AgrAbility that offers free assessments for farmers with disabilities or long-term health conditions, to help determine which kinds of assistive technology they might need. Riders raised $2,600 for AgrAbility in 2021.

“We know agriculture is one of the most dangerous industries we have, but we don’t have a very strong peer-to-peer group for injured farmers,” said Heil, 36. “I felt it was the right time to connect with Ohio AgrAbility and help them meet farmers right where they’re at.”

The money will help pay for an annual, educational lunch Ohio AgrAbility hosts for injured farmers. At the lunch, farmers get an update on technology that might help them, and swap ideas for ways they’ve come up with to overcome obstacles so they can still do their jobs. The money could also help pay to send a couple of farmers to a national conference for farmers with disabilities.

“The money is really nice, but the awareness is also really important,” said Laura Akgerman, disability services coordinator for Ohio AgrAbility, which is run by Ohio State University Extension, the outreach arm of CFAES. “A lot of the people who participate in the ride have never heard of AgrAbility. We’ve heard people say, ‘We’re the best kept secret in Ohio.’ We don’t want to be a secret.”

As a sixth-generation farmer, Heil wanted to give back to an organization that supports his family’s industry. Although he and his immediate family members aren’t challenged by injuries or major health concerns, he knows that might not always be the case.

“We’re always one second away from needing it,” he said.

Besides supporting the state’s agricultural industry, Cursive Ohio gives Heil a chance to perfect his skills making homemade ice cream (it takes him a week), which is served to all who ride as the dessert after smoked brisket. If beautiful country roads aren’t enough to inspire riders, the meal at the end just might.

Sign up for next year’s ride at bikereg.com/cursiveohio. For more information about the event or interest in sponsorship, contact cursiveohio@gmail.com. For a video of the route, visit www.relive.cc/view/vevY54EVRyv.