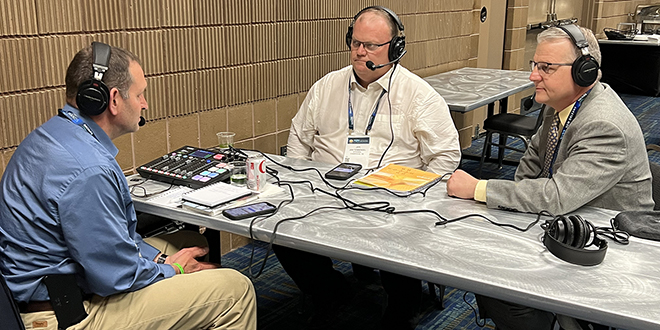 Those reading this likely have more interest in bushels per acre than grams of CO2 per megajoule. But, when applied to biofuels, the number attached to this unit of measure has the potential to make or break massive domestic biofuels markets for corn and soybeans.

Jan tenBensel, a Nebraska farmer and president of the Nebraska Ethanol Board, has spent a fair amount of time looking at grams of CO2 per megajoule because it is an important standard in the ongoing debate about the sustainability of biofuels.

“In a life cycle analysis of ethanol and electric vehicles, you have to look at the base load of carbon intensity. Right now, that number is 114 grams of CO2 per megajoule for the U.S. on average. If you took a Tesla 3, you’d be at about 144 grams of carbon per mile. If you were to take an E98 vehicle that was ethanol optimized you would have 114 grams of carbon per mile,”  tenBensel said. “The electric cars will lower over time as more wind and solar comes on the grid. On the ethanol side, however, by better managing nitrogen efficiency, getting credit for carbon sequestration, and carbon capture and storage at the ethanol plant sequestered underground, we are getting pretty close to zero. I believe we could see an ethanol plant be carbon negative at -40 grams per megajoule of energy produced in the next 10 to 15 years.

“There are very specific numbers that take into account the entire life cycle of the corn plant, but they do not currently factor in the sequestration of the corn plant. Ethanol is essentially a recycled product. It is the original solar energy. We take solar energy, recycle the carbon in the atmosphere, use it as fuel, return it to the atmosphere, pull it back into the corn plant, sequester part of it with the plant and turn part of it into fuel as part of a solar powered operation. Corn fields are massive solar panels. Corn production does have a carbon footprint we need to be aware of, but modern farming and modern ethanol production is also a very efficient process.”

Along with the carbon component, the role of petroleum is still a major factor in the future of ethanol as well.

“For over 140 years, ethanol and oil have fought for market share. A lot of people feel like ethanol is not perfect, because ethanol is not perfect. But people sometimes equate not perfect as an enemy of the good. Ethanol is good and it is here now. In the future, we have some zero emission options but we don’t have that today. For now, ethanol checks all of the boxes. It has lower greenhouse gases. It is a domestic fuel. It replaces the most toxic, the most cancerous and most expensive parts of your gasoline. Many people do not realize that gasoline has a number of different ingredients, up to 1,000. You have never had the same tank of gasoline twice in your life,” tenBensel said. “Gasoline is full of saturants, oliphants, aromatics. As we replace the benzene, toluene, ethylbenzene, the xylene,  the C9 and the C10 aromatics — the really bad ones — we can replace those with ethanol at a lower greenhouse gas emission and a lower cost.”

Food versus fuel is also a factor in the ethanol debate, though tenBensel points out that it should not be.

“A box of corn flakes at today’s prices has 8 cents worth of corn in it. The food expense is fractional at the farm gate. You know what really adds to the price of food? The price of oil and the price of transportation,” he said. “People have suggested eliminating biofuel use to help with food prices, but it would take 2 or 3 million barrels of foreign oil per day to replace the current ethanol made in this country. The bottom line is ethanol is not raising food prices.”

The National Corn Growers Association (NCGA) sees this as a next step beyond the Renewable Fuel Standard (RFS).

“Ethanol is uniquely positioned to immediately and affordably decarbonize transportation, including through paving the way to future vehicles with greater fuel efficiency and fewer emissions,” said John Linder, former NCGA president from Morrow County. “The RFS was a game-changer for corn farmers, and the Next Generation Fuels Act builds on that success in advancing our commitment to providing the cleanest, most efficient and lowest cost energy solution.”

The bill would require that automakers phase in higher levels of clean, low-carbon octane by model year 2031. The higher the octane, the more efficiently the engine uses energy. As a clean octane standard, the bill requires that sources of additional octane result in at least 40% fewer GHG emissions than unblended gasoline and sets new limits on toxic hydrocarbon aromatics. These requirements will reduce GHG and tailpipe emissions to build on the progress already made to lower emissions with cleaner renewable fuels. Through advanced engine design features that take advantage of this new fuel, automakers will be able to significantly improve vehicle fuel efficiency.

While ethanol supporters feel these next steps are obvious choices, there are plenty of ethanol critics out there. Lower ethanol miles per gallon, engine damage concerns and a dislike of RFS mandates have all been cited, numerous times. Some feel the trade-off of increasing livestock feed costs versus fuel are not fair. Others argue electric vehicles, and not more ethanol, are the answer. Yet, ethanol still has real merit.

“There are amazing numbers for ethanol you do not hear about very often. This is not getting recognized in D.C. as one of the options that we should be putting on the table right now,” said Tadd Nicholson, executive director of Ohio Corn & Wheat. “The electric car has a role to play in the mix, but it is not the only option. There are other answers and ethanol is one of them. Congressional mandates of the RFS max out in 2022. We knew this date was coming and there needs to be this next phase in biofuels production. The Next Generation Fuels Act is not a mandate. We don’t need that anymore. The ethanol market has matured since 2007. Ethanol is cheaper, it is cleaner and made here in America. It is ready to stand on its own. The Next Generation Fuels Act is about making all fuels equal. We should never be dependent on one fuel type ever again. We were dependent on oil for a lot of years. We need everything to be part of the mix and ethanol plays a major role in this. There is so much innovation now with the way we farm and also the way we produce ethanol. And, it is cheaper to put ethanol in our fuels. If you have filled up your tank lately you understand what the price of fuel means. Ethanol is made in America and it has the ability to help right now.”

By Greg LaBarge, Ohio State University Extension Other than land cost, nitrogen is the highest-priced …