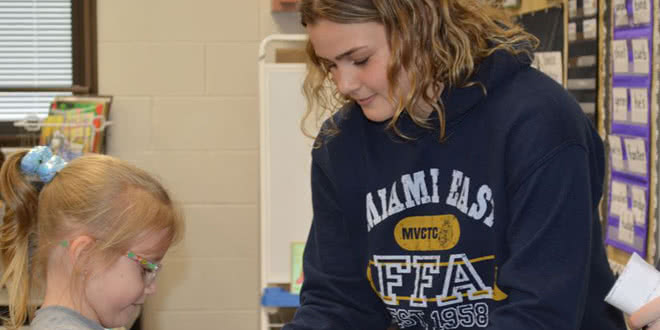 FFA member Reagan Howell helps a student in Mrs. Nosker’s class act out an animal during a game of Animal Charades. The class identified the animal and shared if it was wild or domestic.

Jadyn Bair, Ella Fine, Fletcher Harris and Kyle Larson visited Mrs. Jennifer McCuistion’s classroom and taught the Thicket Game. The activity had students hide as prey versus predator activity. They hid throughout the classroom as one classmate called their name when they were found.
Devin Nix, Jacob Roeth and Thomas Wallace played a game called “What’s That Habitat?” which had the students of Mr. Justin Roeth’s class learn about the habitats of animals. Students identified the “needs” and “wants” of animals in their habitats.

According to Raterman, Project WILD is endorsed by the Ohio Department of Education (Divisions of Curriculum and Instruction and Professional Development), Ohio Department of Natural Resources and Ohio Wildlife Federation, League of Ohio Sportsmen.