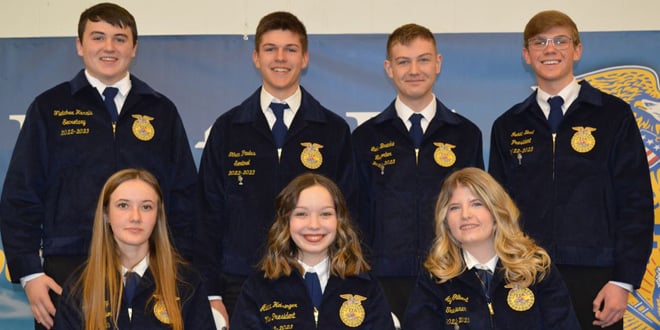 – In 2022 the chapter was named a Gold Medal Chapter and a Top 10 Chapter in the state in the area of Growing Leadership, Building Communities, and Strengthening Agriculture. The chapter was interviewed and results will be announced at the upcoming State FFA Convention.
– Wyatt Black, Alaina Helsinger and Madison Maxson are Top 4 finalists in the Agriscience Fair. They have their interview approaching and their results will be announced on stage at the State FFA Convention.
– Graduate Carter Gilbert has been named a Top 4 in the state proficiency awards program in the area of Service-Learning. Carter is awaiting the final placings at the State Convention in May.
– Gretchen Stevens competed in Ohio’s 2021 World Food Prize and qualified for the 2021 national competition.
– This year, three officers, Adi Richter, Alaina Helsinger, and Kendal Staley submitted Officer Books for review at the State Evaluations. All three earned a gold rating.  They will be recognized at the 2022 State FFA Convention.
– Two seniors have participated in the Senior Capstone Experience where they learn through hands-on experiences with an agriculture company. Emma Sutherly has been working with Miami Valley Feed and Grain. Samuel Sutherly has been working for Sutherly Family Farms.

Honorary Chapter FFA Degree
One of the premier goals of the FFA is to promote leadership among its students.  The Miami East-MVCTC FFA Chapter would not be able to do special projects without some very special people.  There was one individual recognized with the Honorary Chapter FFA Degree because of their continuous support of the FFA – Miami East High School Principal Todd Gentis.

American FFA Degree Recipients
The American FFA Degree is the highest degree for a member to receive in the National FFA Organization. This degree will be bestowed upon graduates at the upcoming National FFA Convention.  Erin Baker, Adam Bensman, Makayla Brittain, Carter Gilbert, Paige Pence, Rylee Puthoff, Jimmy Sutherly, Seth Wells, and Lauren Wright will receive their degree in October in Indianapolis, Indiana.

Additional Chapter Awards were the Star Greenhand Award to Wyatt Black and Rhylee Eichhorn. The Excellence in Agriculture Award went to Evan Massie. The Blue and Gold Award went to Chloe Gump. The Star Chapter in Agribusiness was Emma Sutherly and the Star Placement was Samuel Sutherly.