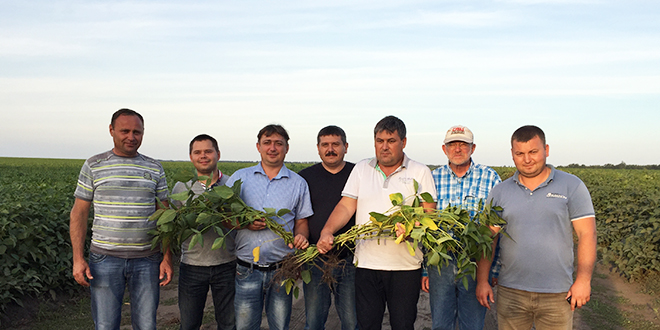 Reviewing soybean pest control near Alexandria, just off the Dnieper River. They were proud of their crop but there were many pods fed on by late season caterpillars. Photo provided by Harold Watters.

I thought it was worth mentioning here that the phrase “we’re all in this together” came up twice in two separate interviews, said by two different people in different stages of life and their careers. As a result, the phrase is included in two separate, recent stories about topics focused on very different parts of the world.

I just met Joe and I’m looking forward to working with him throughout the 2022 growing season as one of our Between the Rows farmers. He farms with his family in Shelby County, the subject of a recent story. Joe was the winner of Ohio Farm Bureau’s Excellence in Agriculture Award for 2021 that recognizes successful young agricultural professionals who are actively contributing and growing through their involvement with Farm Bureau and agriculture. Joe works with his father, uncle and cousin on the family cash grain operation where they raise corn and soybeans on around 4,000 acres.

Joe is a member of Shelby County Farm Bureau, his rural electric cooperative board, Farmer Veteran Coalition, Sidney American Legion, Homegrown by Heroes, and the Troy City Schools Lunch Buddies Program. Joe earned bachelor’s and master’s degrees from Bluffton University and served six years in the U.S. Navy where he deployed on two different tours and completed two Naval Schools in Electronics and High Frequency Communications. He and his wife have two children.

While in the Navy, Joe worked closely with people from all over the country, many from very different places than a farm in Shelby County. This fact was no more apparent than when some of his best Navy friends (who had travelled the world with Joe) visited the Everett farm in Shelby County for the occasion of Joe’s bachelor party and wedding.

“They got a kick out of coming out here to the farm. People think that when you come from a  farm you have one pig, one chicken and a horse,” Joe said. “A friend from the Navy who is from California came out to the farm. He was serious when he asked before he came out if we had running water. Then he asked if we had to go outside and pump it by hand. He had never been out in the country before. I told him we do have running water and we take showers like everyone else.”

The same friend was truly alarmed at how dark it was when he stayed upstairs in a Shelby County farmhouse. He was also amazed how green the grass was in the area. Their friendship in the Navy formed in spite of the huge differences in their backgrounds (and incredible misconceptions of life on a farm).

About his time in the Navy and the people he met, Joe said: “I enjoyed the teamwork and meeting people — people who come from all walks of life. You learn that we are all in this together.”

Harold is a recently retired Extension agronomist after more than 20 years at Ohio State. His story with OSU dates back to 1975 when he was a student employee at the Farm Science Review.

Harold served as co-leader of the OSU Extension’s AgCrops Team from 2004 through 2019 and he served on the Ohio Certified Crop Advisor board. Harold was also actively involved in the OSU AgCrops Team demonstration plots at Farm Science Review and agronomic programming at the Conservation Tillage Conference.

In retirement Harold plans on doing some skiing, which is what he was going to do soon after he joined us for a recent podcast and story about the somber topic of his many friends and acquaintances in Ukraine.

Harold has been working with Ukrainian farmers and agronomists for over a decade. He has traveled to Ukraine many times to teach agronomics in person, but had switched to virtual teaching since 2020. Watters was finally set to return in person late last year but his recent trips have all been canceled due to the Russian invasion.

“I have met literally a thousand people from Ukraine. I think it is so horrible that they are being killed in this current invasion,” Watters said. “They are a wonderful people and do not deserve this.”

Harold has been asked numerous times about why he would travel to the other side of the world to help improve the operations and productivity of farmers not from Ohio, or even the United States. Why share our knowledge and experience with them?

The seeds you will be planting this spring or the work you do to facilitate farm production will produce something of value for someone somewhere in the world. No matter who the end user of those farm products may be or where those products end up, your agricultural efforts in 2022 will enhance the life of someone. They need you, but you also need them. You need them to buy your product. You also need whatever gifts they may bring to your world. As this old world gets smaller, our lives become more intertwined. We need each other, because, well, you know… 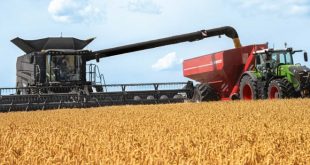 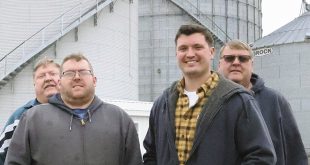 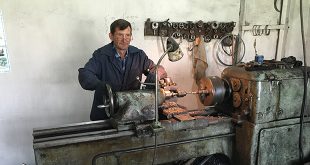