The May 12 WASDE Report (supply and demand) provided several positive surprises and higher grain prices for producers. First, the U.S. corn yield for 2022 was pegged at 177 bushels. In a rare move, USDA’s first supply and demand tables for the 2022 crop year project the corn yield for this year as different compared to the February Outlook Forum. That report estimated the U.S. 2022 corn yield at 181 bushels. This compares to past years when in consecutive fashion from 2014 to 2021 the May corn yield was the same as the February Outlook Forum. The U.S. corn yield last year was 177 bushels.

For months the market has been filled with various private reports that the U.S. corn yield had to be a record due to the tightness of corn supplies around the world. In addition, some had already suggested that a record U.S. corn yield for 2022 would not be large enough to alleviate shrinking supplies of corn around the world, and that production from the 2023 crop year would be needed to remove the concept of “tight supplies.”

World corn supplies continue to be tight due to dry weather and lower production in South America. In addition, the reality that Ukraine corn stocks cannot be readily available for export due to the ongoing Russian invasion further restricts world corn supplies. China cannot import 6 million tons of corn purchased from Ukraine with the huge wild card being, “When will it ship?” Numerous private analysts point out that USDA could be 200 million bushels too low in their U.S. old corn export estimates. Currently U.S. corn exports are pegged at 2.5 billion bushels and should be increasing in future USDA monthly WASDE Reports.

Another surprise from that May 12 report is that U.S. wheat production was below trade expectations, marking the sixth consecutive year of declining production. The dry U.S. Southern Plains continue to point to even further declines in wheat production. Adding further insult to injury, the wet conditions in the U.S. Upper Plains are slowing the planting of spring wheat and corn. North Dakota had not one, but two, freakish blizzards take place in April when just one event dumped up to 30 inches of snow. Mid-May weather forecasts indicated several rain events likely to take place in the following 10-day period. In addition, new crop 2022 world wheat ending stocks were less than expected. The “second” surprise had wheat prices sharply higher on that May 12 report day. KC wheat made new contract highs as July KC wheat closed at $12.70, up 69 ½ cents. Chicago July wheat that day closed up 65 ¾ cents at $11.78 ¾, well below its contract high at $11.95 ¼ which was made early March.

U.S. wheat bakers and world wheat buyers are estimated to have only booked 25% of their third and fourth quarter needs. They continue to hope prices will drop but for them, yet prices are not cooperating. In addition, note that India and Pakistan typically jointly export about 10 million tons of wheat yearly. Drought conditions suggest that instead, they could be importing 2 million tons of wheat. This only adds even more fuel to the growing fire of uncertainty of available world supplies of wheat, corn, and soybeans.

China continues to be a sporadic buyer of U.S. soybeans. Mid-May following the May 12 report China bought two cargoes of U.S. old crop soybeans. While that represents a miniscule portion of their soybean import needs, that purchase takes place amid rising Brazil export selling values. During early May it looked like Brazil would be unable to export soybeans after early August. In addition, at the time of purchasing those two U.S. soybean cargoes, China had booked just 25% of June and July soybean imports.

Look for big price changes and plenty of price volatility well into August. Remember, the new CBOT daily price limits are 50 cents for corn and $1.15 for soybeans until Oct. 31. 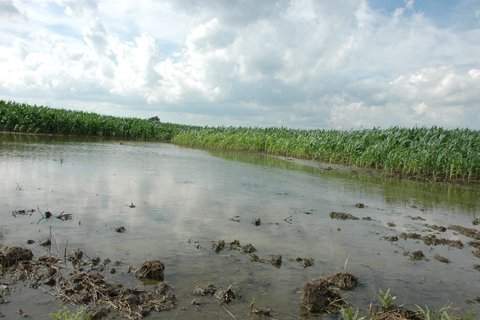 By Laura Lindsey, Ohio State University Extension Wheat harvest is just around the corner, and …