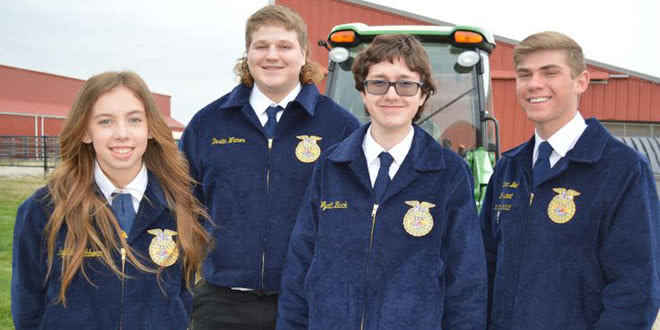 On Friday, April 29, the Miami East-MVCTC FFA General Livestock Evaluation Team competed in the Ohio FFA State Finals Livestock Evaluation Career Development Event. The competition was held at the livestock farm of The Ohio State University. The team qualified for the finals after placing in the top 10 in the state in the March preliminaries.

During the finals competition, the team conducted two team activities, a marketing scenario and a breeding selection scenario. The individuals also evaluated four classes of livestock and gave a set of oral reasons for each of the classes.

The team consisted of Isaac Beal, Rylee Eichhorn, Dustin Winner, and Wyatt Black. Isaac Beal placed first in the contest, out of over 950 total individuals. The team placed third overall in the state and qualified to represent Ohio FFA at the American Royal Livestock Judging Contest in Kansas City, Missouri in October. The team earned a banner for the agriculture classroom. This is the highest placing livestock team Miami East has had in over 25 years.