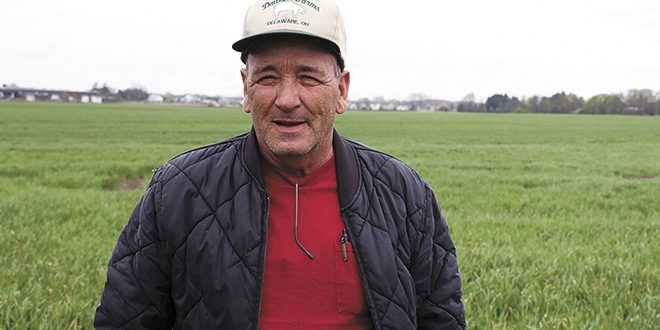 Doug Dawson in Delaware County thinks this year’s wheat crop could be strong on his farm, despite some holes from the excessive winter moisture.

It did not take 2022’s skyrocketing wheat prices for Doug Dawson to invest time, money, and management into wheat on his Delaware County row-crop and hog operation. He has been intensively managing wheat for years and it was paying off even before the big jump in prices in recent months.

In 2021, Dawson finished a close second in Ohio’s Wheat Yield Contest with over 135 bushels per acre (Doug Goyings in Paulding County had the top yield with 138.27 bushels). Dawson has been stepping up management of his wheat crop for a number of years and is hopeful his 2022 wheat will top last year’s yield.

“I know a lot of guys who spend hours and hours out managing the corn fields and I probably spend that in my wheat, but with $11 wheat, I’ll take that time,” Dawson said. “With all the hogs and manure to spread every year and everything else on our plate, I have to plant at least 200 acres of wheat so I have a place to haul the manure. If I’m planting wheat, I need to make the kind of money that corn and beans can make. Last year, I made more money off my wheat acres than I did with my corn and beans. And then this year, I started forward contracting when it was $7.50 to $8 and then $9 and then $10. And I have not sold any at $11 yet because I’m scared to sell anymore. I’ll sell up to about 80 bushels. I’m braver than most, but, but that’s because I’m going after it. Everybody with corn and beans is looking at ROI, and I’m looking at ROI on wheat too.”

Wheat prices reached a 14-year high in March over $12 and remain strong, largely due to the conflict in Russia and Ukraine. Ohio’s farmer plan on harvesting 610,000 acres of winter wheat this summer, a 5% increase from the previous year, according to the USDA National Agricultural Statistics Service’s Ohio Field Office. Nationally, all wheat planted for 2022 is estimated at 47.4 million acres, up 1% from 2021.

Dawson is working hard to make the most of his wheat acres, and the good wheat yields on the farm start with good soils.

“The ground we plant on is well-drained. It is a silt-loam Blount with really top-notch phosphorus numbers and 4% to 5% organic matter. That’s a good start,” Dawson said.

After soybeans, wheat is planted in early October.

“If you’re not going to get this wheat planted before the first of November, you better forget it. But with the organic nitrogen that I have in the soil from the manure, I don’t plant wheat in September anymore,” he said. “I get too much fall growth and that leads to more disease. I like to start planting the first week of October. Three years ago, I thought I was behind the eight ball because I didn’t finish until Oct. 22 or 23. I was passed the cutoff date for crop insurance. I took the penalty and it paid off. So I have about a 3-week window to plant.”

The wet winter left more holes than usual in the wheat stands, but there is still very strong yield potential for Dawson’s wheat in 2022.

“We had a boatload of rain in February and the first part of March. It finally dried out the end of March. I’ve got holes in every field — even in wheat fields that I wouldn’t normally have holes in. I finally was able to get out there the first week of April and put about 60 pounds of nitrogen on and a micronutrient package to stimulate the roots,” he said. “Then on April 28 I went back out with streamers and put about at least 20 gallons on. Where the wheat looks better, I bumped it on up to 30 gallons. That will give us a total of about 150 pounds of nitrogen on the better-looking wheat where we’re really trying to push it.”

Fungicide is also an important part of the high yield wheat puzzle.

“A few years ago when it was really warm, we actually put our first fungicide treatment on the end of February because we were already seeing disease. This year it’s just been colder. When we went out the first time we couldn’t find any disease, so I did not put anything on that first trip the first week of April,” Dawson said. “At the end of April, we walked the fields and we found a little powdery mildew and a little bit of rust. I put a product on to protect us through the flag leaf, then we’ll come back when it’s pollinating and hit it again with another micronutrient package and our last shot of fungicide. I have had a couple of years there where my wheat actually saw three rounds of fungicide. And when I went from one to two, I saw a benefit in yield. And that year when I went from two to three, we saw a benefit too.”

Dawson also tries to get an early start with harvest to maintain high quality, but it does not always work out.

“Our July weather last year was a challenge. It’s going to take us about four days to combine 300 acres, even with the two machines that we’ve got. We’ve got one big one and one small one, but you’re not driving very fast when you’re combining 140-bushel wheat. We combined for three days last year and then we had 7 inches of rain. It was eight days from the time we got rained out before we got back in. I had to turn the four-wheel drive on and it was 18% moisture,” he said. “We were tracking the heck out of the field and drying wheat. If we’d have left it there one more day, there would have been sprouts. If you don’t have quality wheat to sell, it becomes feed grade and now it’s half price. Drying wheat is a slow, painful process, but harvest priority is really important. I do usually try to push the envelope a little bit to get started.”

After harvest, straw is baled off of some of the acres, and usually some of the acres are planted to double-crop beans and cover crops. Some will get tile work this year and manure will be applied.

With strong yields and profit potential, Dawson is considering expanding his wheat acreage significantly in 2022.

“We’re only at about 15% of our acres in wheat, but now that wheat’s up there around $11, I’ve been trying to push the pencil. I might make the most money if I’d plant 1,000 acres of wheat this fall, but I’m not sure how I’m going to get 1,000 acres planted when we don’t have a bean in the ground yet by the first of May,” he said. “I will say I wish I could advance my corn yields as fast as I have advanced our wheat yields. You never used to hear guys talk about a 100-bushel wheat, but there’s a lot of 100-bushel wheat out there today. I’ve got a crop consultant who likes to brag and make my head swell up. And he said, ‘I think you’re still looking at some of these better areas of the fields this year might be 140 bushels.’ Two years ago, we went back and looked at the yield maps and there was a spot that made 175. That’s my goal. I mean, if one spot can do it, let’s figure out why the whole field can’t do it.”

By Joel Penhorwood, Ohio Ag Net It is a spectacle unique among livestock shows — …