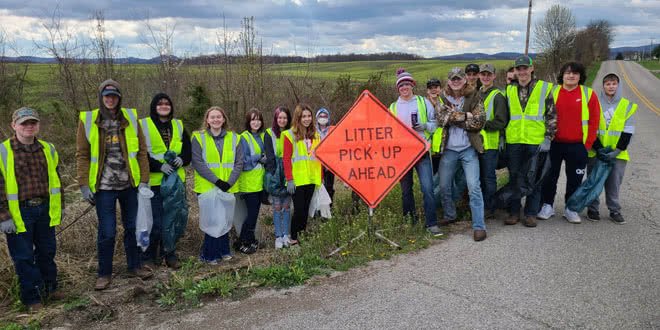 Students lend a hand during the ZT FFA roadside clean up event.

FFA Members Beautify for Buck Fifty (And for ZT Prom Too!)

If you happened to drive up Sulphur Spring, Snyder or Dry Run Roads on Friday, April 8th you might have noticed a crew of neon yellow clad ZT FFA members picking up litter from the roadsides that day! FFA members partnered with the Ross County Litter Control agency to remove 72 bags of trash and 22 bags of aluminum cans from the 5 miles of roadway they covered. The Buck Fifty runners will race along those roads on April 22nd so the FFA wanted to make the area around Zane Trace look its best for participants in the event.  The timing of the clean up day also made the roadways clean for the Zane Trace Prom. The Zane Trace FFA Chapter is a satellite of PRCTC.

Do you know the steps involved in administering an oral tablet to a dog? How about placing a muzzle on a cat or haltering a ruminant? Can you tell the difference between Metzenbaum and suture scissors? Well, if you aren’t sure of your skills in these areas, just as any of the five members of the Zane Trace FFA Veterinary Science team who competed in the state finals on Wednesday, April 13th. The team of Adison Muntz, Sarah McGraw, Sadie Swepston, Ryan Clark and Reiley Whittington made their first ever trip to the state finals after competing virtually last year. The group placed 16th overall and has a goal of a top 5 finish next year. The Zane Trace FFA is a satellite program of PRCTC.

On the evening of April 6th, ten members of the Zane Trace FFA Chapter, a satellite of PRCTC,  took part in the officer interview and practicum portion of their election process. The members were interviewed by a panel of three community leaders and shared their ideas, skills and strengths related to the offices for which they chose to run. Each member also completed an activity related to their selected offices along with completing an application and obtaining letters of recommendation. After the interviews, members voted to finalize the officer slate. The 2022-23 Officers are:

The ZT FFA would like to thank everyone who helped with the evaluation and selection process. This year’s officer team will be a very strong one and will look to build upon our chapter’s success!

This spring four members of the Zane Trace FFA, a satellite of PRCTC, qualified in the top four of their respective areas in the Ohio FFA Agriscience fair competition. Sophomores Kailee Adkins and Kendra Detillion competed in Food Science and Technology with their research project over alternative fillings for buckeye candies while Ellie Doles and Sadie Swepston competed in Animal Science with their research project over the effect of barometric pressure and temperature on egg production in laying hens. Both groups prepared slides of their work and were judged via Zoom by industry experts. Their placings will be revealed on stage during the upcoming Ohio FFA Convention on Friday, May 6th.