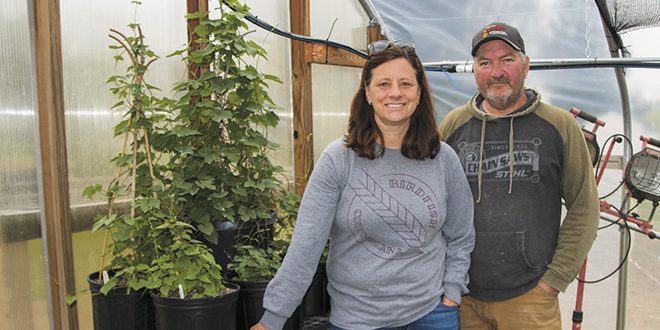 Barn Talk Hops in Medina County, is owned by Mike and Jenny Napier, who are working to fill the need for locally grown hops.

No matter where you travel in Ohio these days, you’re not far from a craft brewery. According to the Ohio Craft Brewers Association, the state has 398 craft breweries, ranking fifth in total production in the United States. The rise in craft breweries has led to an increase in demand for local hops.

Hops are an essential ingredient in beer, adding bitterness to counteract the sweetness of the malt. USDA records from the late 1800s show that hops were grown across many counties in the state, but their popularity waned in the early 1900s due to Prohibition and plant disease pressure. A re-energized interest in local brews and local products over the last decade has resurged the demand for hop production in Ohio.

Barn Talk Hops in Medina County, owned by Mike and Jenny Napier, is working to fill the need for locally grown hops. The couple started raising the brewing staple in 2014 after Mike retired from his 32-year career as the city of Wadsworth’s equipment mechanic.

“After retiring, I was ready to try something new. We were talking in the barn one night about an article we read from Ohio State Extension on growing hops. The article said that hops could be productive as a specialty crop in our state. We were drawn to the fact that you didn’t need hundreds of acres to get started, so we thought we would give it a try,” Mike said.

The couple traveled to Wisconsin in 2013 for a three-day course on hop production. Despite growing up on a beef farm and having some agricultural background, Mike knew hop production would be a whole new ballgame.

“It’s definitely not corn or hay,” he said.

Upon returning from their trip, the couple got to work building their hop yard, which they affectionately named Barn Talk Hops, after the catalyst conversation in their family’s barn.

The more information the Napiers learned on hop production, the more they realized they needed to invest in processing equipment. OSU Extension estimates that it costs nearly $25,000 in initial investments to properly set up a high-line trellis hop yard. The processing equipment needed to make the hops into a finished end-product for brewers could cost upwards of another $150,000. It’s the main deterrent for many hop growers, Jenny said.

“There’s a small market for fresh hops in Ohio. There is a much higher demand for pelletized hops, so we knew we were going to have to purchase the necessary equipment to make those,” Jenny said.

They ordered a used harvesting machine from Slovenia. It arrived in two parts, seemingly sliced in half. Thanks to Mike’s mechanical skills, the machine was welded back together and assembled. The machine is capable of processing up to 170 bines (not vines) per hour, picking the individual cones from the long stems.

They then purchased a dryer that slowly dries the hop cones down from around 80% moisture to 10% moisture. The process is slow, usually taking 12 to 16 hours, to not damage the oils and acids in the hops.

After the hops are dried, they are baled in the cooler until they are ready to be ground down. A hammermill crushes the hops, then a pelletizer in a food-safe room forms usable pellets. Lastly, they are vacuum-sealed in a light-blocking mylar bag. Oxygen is removed and nitrogen is added to each bag for added shelf stability. It takes roughly a dozen pellets to make an average 16-ounce glass of beer. The Napiers sell 11-, 22- and 44-pound bags of pellets.

“The first hops meeting that OSU Extension put on had maybe 200 to 250 people in the room interested in how to grow hops and learning more about the market potential for them,” Jenny said. “The costs for the processing though are a real bottleneck for growers. We decided there was an opportunity to process for ourselves and other growers.”

The Napiers processed for 20 different farms in 2021, supporting hop growers both big and small. Jenny estimated they saw over 5,000 pounds of hops move through their machines. They also grew their own 3.5 acres of hops. Each acre has roughly 900 plants on it. The harvest season is typically in August.

In addition to growing and processing hops, Jenny also has a landscaping business and a greenhouse where she propagates hop plants and other perennials. She has 23 varieties of hops for sale, including two that were developed and trademarked in Ohio.

“The Alleigh and the E’Desem varieties were developed by another grower named Bob Bero in Youngstown, Ohio. I’ve been working with him to propagate them for the last four to five years. We are wanting to get them ready for commercial use as a proprietary hop,” Jenny said. “A brewery called The Brew Kettle and Birdfish Brewing have already started to use them in a beer.”

Despite the huge amount of potential, there are significant challenges when it comes to growing hops.

“We’ve got a pretty strict disease regiment in place in the yard to prevent mildews and pests,” Mike said. “We spray about every seven to 10 days and rely on an integrated pest management program too. Hops require a lot of water, but they also don’t like to sit in water. We rely heavily on drip irrigation and sometimes send fungicides through it too.”
It takes roughly three years before a hop plant is fully productive. Once mature, the bines can grow upwards of 20 feet. Each plant must be trained to climb the trellis. The rope has rough edges, allowing the bine to grip as it grows vertically.  Hops are perennials and will grow back the following year after each harvest.

The Napiers are focusing on increasing the yields of hop plants in Ohio. To make a profit, each plant must produce at least 1 pound of dried pellets. They took part in a 2-year study on soil fertility effects on hop production and Jenny has hopes to start a study on native hops to learn how to make today’s varieties sturdier for Ohio’s conditions.

“We have the quality, now we just need to increase production and keep trying for new, unique flavors,” Mike said.

Barn Talk Hops’ drive to grow quality ingredients is noticed by brewers. Garret Conley, the brewer at UnHitched Brewing Company in Louisville, Ohio has been in the beer-making business for many years. He started at big brewing companies in Chicago, before moving to Cleveland in 2016. He was looking for a new opportunity when he learned about UnHitched. He joined the team and the brewery officially opened in October of 2019.

What makes the brewery unique is its mission to source local ingredients. All ingredients for their beers come from within 400 miles of the taproom, with the farthest ingredient being yeast from a company in Chicago.

“My mother grew up on a farm, so I have a lot of appreciation and respect for farmers and agriculture,” Conley said. “When I started at UnHitched, I reached out to the Ohio Hop Growers Guild to figure out where to source our hops from. Barn Talk Hops is really involved with the guild, so that’s how I met Mike and Jenny.”

Conley credits the Napiers for being influential to the Ohio hop industry.

“As processors, they are responsible for the rebirth of the hop industry and for truly setting quality standards. Without them as a farm, the regeneration of hop growing in the Northern part of the state would’ve been impossible, because that processing end is so critical,” he said.

The brewery uses about 90% Ohio sourced hops and 10% Michigan sourced hops. Their malt is grown in Columbiana County, processed in Brunswick, and then the leftover distillers’ grains are sold to a local cattleman once the brewing process is complete.

Conley shares that many brewers were hesitant to try “new” hops raised in Ohio. He said that there are many one-of-a-kind flavors in Ohio hops, such as melon undertones.

“Ohio brewers should be adventurous and use Ohio hops because using hops grown here adds such a unique flavor profile to beer,” Conley said. “They should be proud of the farmers in our state.”

The Napier family of Barn Talk Hops can certainly raise a drink to that. 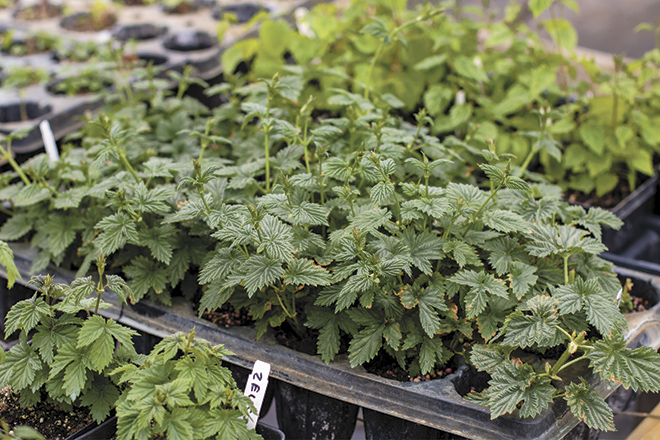