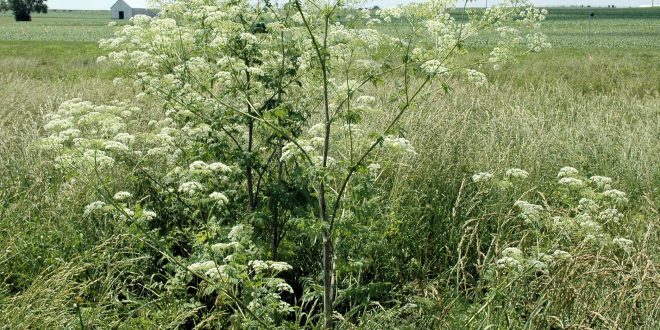 Problem weeds are showing up in pastures and hayfields around Ohio and getting early season control and/or identification of them can help keep grazing livestock safe and healthy. In some cases, the extended cool, wet conditions this spring minimized control opportunities and have provided an advantage for problem weeds in 2022.

Fields of yellow flowers are abundant this year across the state as many annual crop farmers faced planting delays. Some pasture fields are covered in blankets of yellow too. The scenes are deceptively beautiful with their sunny appearance but may actually pose a deadly threat to livestock if the plant happens to be cressleaf groundsel, which is also known as butterweed. Cressleaf groundsel is known to cause livestock poisonings in harvested or grazed forages.

Cressleaf groundsel is a member of the aster family and displays yellow daisy like blooms in the springtime on upright hollow stems that have a purple hue. These plants are winter annuals, meaning the seed germinates in the fall producing vegetative growth and then flowers in the springtime. If allowed to set seed, the plants will appear again in greater numbers the year following. The plants typically go unnoticed in the fall, which is the best time for weed control.

Cressleaf is most commonly found in annual crop settings because bare soils in the fall and spring allow the plants to grow without competition from the crops. However, it can be found in pastures and hayfields if seed travels from an infested field nearby. Effective herbicide control can be best accomplished in the fall using products that contain 2,4-D. If the plants are already flowering this year, mowing and removing the plant residue is the best option to prevent animal consumption and seed deposition.

There are other yellow flowers with a similar appearance blooming now that are less concerning, but problematic as competition in crop stands. One that is commonly confused with cressleaf groundsel is another winter annual called yellow rocket. Unlike cressleaf, yellow rocket is in the mustard family. The flowers look very different from cressleaf and the plants are typically shorter on green stems and grow with a taproot. Although yellow rocket can cause digestive upset if consumed in large quantities, it is not considered poisonous or noxious.

Before implementing any weed control program, getting an identification confirmation is very important! Study the whole plant before making a judgement call on how to address it’s presence.

Poison hemlock had already emerged by mid-May in a vegetative state around Noble County and beyond. This is followed by bolting and blooming on stalks 6 feet to 10 feet tall. All parts of the plant are toxic to all classes of livestock if consumed and is prevalent along roadsides, ditches, and crop field borders. It is a biennial weed that does not flower in the first year of growth but flowers in the second year. The earlier you can address poison hemlock with mowing and/or herbicide application, the better your control methods will be.

Poison hemlock is related to Queen Anne’s lace, but is much larger and taller, emerges earlier, and has purple spots on the stems. Another relative that is poisonous is wild parsnip, which looks similar to poison hemlock, but has yellow flowers. Giant hogweed is another relative of poison hemlock that is also toxic. All of these plants have umbel shaped clusters of flowers.

According to Joe Boggs of Ohio State University Extension, “Poison hemlock plants contain highly toxic piperidine alkaloid compounds, including coniine and gamma-coniceine, which cause respiratory failure and death in mammals. The roots are more toxic than the leaves and stems; however, all parts of the plant including the seeds should be considered dangerous. The toxins must be ingested or enter through the eyes or nasal passages to induce poisoning; they do not cause skin rashes or blistering. Regardless, this plant should not be handled because sap on the skin can be rubbed into the eyes or accidentally ingested while handling food.”

Treatment for poison hemlock includes aggressive mowing to prevent flowering and seed production or herbicide application. Some commonly available herbicides that are generally effective on this weed include glyphosate, 2, 4-D, Remedy Ultra, and Crossbow. All treatment methods are most effective when employed while plants are less than 2 feet tall.

Don’t let poison hemlock gain ground on your property this season! If you see it, take steps to eliminate it. Learn more about poison hemlock identification, concerns, and control by watching the following video by OSU Extension on YouTube at https://youtu.be/XYiVgRoo29s.

According to Tony Nye, OSU Extension Educator ANR, Clinton County, additional toxic plants to watch for through the summer grazing season include: