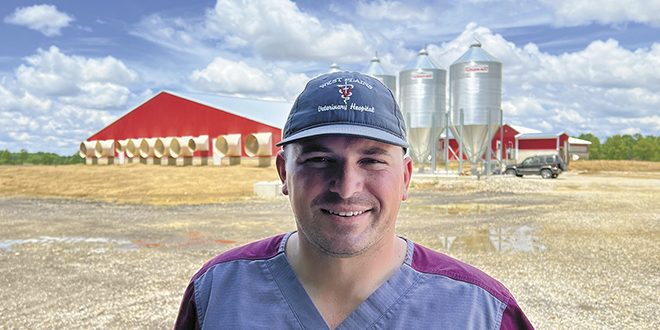 The siting of a livestock facility can have countless implications — both good and bad — for decades into the future. It is not something to be taken lightly.

“In 2015, the Ohio Pork Council developed a siting program that assisted individuals in making systematic, informed decision for the placement of barns. After public pressure about the building of new hog barns, OPC wanted to equip producers with education to properly evaluate the right location for a barn,” said Cheryl Day, executive vice president of the Ohio Pork Council. “The assessment is simply one of many tools to help producers evaluate possible sites for a hog facility. Educational workshops were held throughout 2016 teaching producers how to use the tools and help educate them on being good neighbors.”

The program provides a scoring system for properly siting new hog facilities to maximize the quality of care for the animals, sustainability and efficiency, while minimizing environmental impacts and disease concerns.

The siting program was part of the process for Grant Price, D.V.M. in Seneca County as he was planning a new contract hog production facility working with his father Todd Price, D.V.M. Price Family Farms raises 600 acres of corn, soybeans, wheat and hay and also operates a commercial wean-to-finish production system raising commercial market pigs. In addition, the family has 80 sows for raising show pigs.

“Our production system buys weaned pigs from a contracted sow farm and finishes those pigs and then sells those pigs to a packing plant in Indiana. We finish about 40,000 pigs a year, so it is smaller in today’s terms, but it’s enough to justify doing it and keep our hands, as veterinarians, in the pork production business,” Todd Price said. “Basically years ago, we started looking at this as veterinarians, on helping producers site barns so that we could keep the pigs far enough apart that we didn’t have health issues spreading between them. One of the original siting programs was keeping the proper distance between the barns. Then as it developed and evolved over time, and as houses got closer, we started looking at how we are able to be good neighbors with a building site. Even though it’s a perfect site for a barn, if it is too close to houses, we may have to move it because of that. The siting program takes in a bunch of different things, including distance off the road, if there’s any kind of biofilter in the area like a woods or a tree line, or staying away from water sources, we want to stay away from running water as far as we can. Most folks never even think of some of these things. It started with producers determining how to do it, and then it’s evolved over the years. And the most recent one has been out now for 5 years. We try to site barns in a way that considers neighbors, manure hauling capabilities, access to farm ground, road access — all those things to try to help producers build a perfectly sited barn so they have the least amount of issues moving forward. All that makes it easier. It sounds like little things, but you’re building a barn to be there for 40 years. We want to site it so that it’s at the best possible place.”

With a number of buildings already sited in the Price operation, the checklist was almost second nature when Grant and his brother, Daniel, decided to add their own double-wide buildings last year.

“Obviously site selection is important for putting these buildings up. You can’t just put a hog barn anywhere and expect everything to go great,” Grant said. “We already had some of these identical barns and we liked them from ventilation standpoint, from a manure storage standpoint, and handling the pigs in and out of the building. This is the barn that we’ve kind of fine-tuned.”

As is turned out, neighbors were expressing concerns (including numerous misconceptions) about the new barns for the Price brothers, and the site planning scoring system was a useful tool in addressing those concerns as well.

“We had to do some education. People literally thought that there were going to be 10,000 pigs back there. The plan was just written proof we were doing the best we could and what we should be doing. We got X amount of points for being one plus miles away from the neighbor or X amount of points for being so many feet off the road and things like that,” Grant said. “When we actually scored it through that scoring system, we were well above the threshold.”

With proper storage, for example, manure only needs to be hauled once or twice a year (usually in the fall) and applied on growing cover crops to minimize chances for nutrient loss and odor. Properly sited and planned hog barns are not only beneficial for the specific owner and community, but the industry as a whole. A barn in the wrong place is set up for challenges that are not good for anyone.

“One bad egg can manage to ruin things. I know that there are a lot of people out there that do a great job, but that one barn that doesn’t follow the siting protocols and they don’t talk to the right people who have been involved in the industry and understand the process can ruin it for the rest,” Grant said. “This plan was made by farmers for farmers. Especially if you are just starting out you can really get a lot from this.”

After Grant’s barn went up last year, raising hogs has gone smoothly both in the barn and around it.

“It’s been quiet. The biggest thing that I’ve heard from people is that they don’t smell anything and it amazes them,” Grant said. “If you’re really close, you can hear some fans, especially in the summer heat, but feed trucks roll in and out before 7 a.m. and generally hogs are loaded and out the door before most people are leaving for work. I would say it’s been well-received. Now that it is up and running, it just sort of is what it is and people have moved on with it.”

Any successful operation starts with a sound plan on a proper site.

“Anybody that’s getting into this business and investing what it takes to put a finisher up or a nursery up certainly wants to have that thing sited so it’s the best possible place for them and for everybody in the system. We do hear once in a while about a barn that is not sited properly where somebody gets excited, decides to go away from the plan but I think those days are numbered,” Todd said. “With the Lake Erie issues and the things we’re looking at, we have to do due diligence as producers to make sure that we’re maintaining our environmental protection. We have to do those things as producers to put our best foot forward. Last year, we had some concerned neighbors and township trustees. The easiest way to communicate with them was with the siting program. After it was done, we took it to the township meeting and offered it to different neighbors that came in to ask questions. I think it put them at ease that knowing that the Ohio Pork Council and these producers are doing what is needed to look out for what’s best. They know that after looking at the siting program, we’re trying to do our best as producers to protect them as well as our pigs. This is not just all about the producer protecting their own dollar. It’s also about protecting neighbors and other livestock in the area.”

For more information about the siting plan, contact the Ohio Pork Council at ohiopork.org.