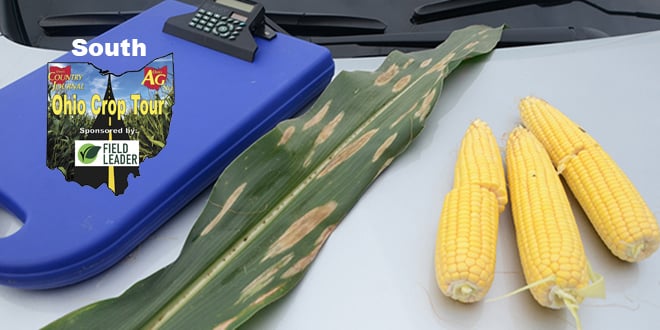 Corn: It was a thin stand of corn and the soil type did not help. We saw more GLS than we have seen in other fields. The yield was 140 bushels.

Soybeans: The beans looked good but they had a long way to go. There were a lot of blooms but no pods. Nodes were about 2.5 inches apart. With more rains these beans will make 45 bushels.

Corn: This was thick 20-inch corn with a population of 38,000. The yield was 236 in the best corn on this leg of the trip. It was planted in mid-May. There were discolored, aborted kernels on a couple of ears, otherwise no disease or insect problems.

Soybeans: The canopy was nearly 40 inches. There were some pods aborting with nodes 2.5 to 3 inches apart. There was no disease or pests. These are late beans and the field looked very good with 50- to 60-bushel yield.

Corn: This is not all that uncommon in Ohio, but there were no ears to look at yet. This field had no tassels and was in V8 to V10. This is obviously a challenge to estimate. It is short corn and has a very long way to go, but is healthy with no insect or disease and will probably make some corn. We think a 120-bushel guess is fair. The calendar will play a big role in the final yield here.

Soybeans: These beans were short, with a 22-inch canopy, but were even and fairly well podded. There was no insect feeding or disease in these 40- to 45-bushel beans. The calendar will play a big role in the final yield here too.

Soybeans: The canopy 33 inches. The beans were good to excellent. The distance between nodes was excellent. The pods were filling and the yield was between 50 to 60 bushels. There had been more rain here than the other Preble Co. stop.

Corn: This corn was 176 bushels, but still pollinating. It had a later plant date, but great plant health and no insect pressure. There was inconsistency in the corn here.

Soybeans: The canopy was around 28 inches with 1.5 to 2-inch node spacing. They were starting to set pods, but a fair amount were aborted. The ground was very dry. This was a 40- to 45-bushel field in need of some rain.

Corn: There was no disease or insect pressure. The corn is at R4 stage with good kernel depth. This was a good, consistent field with 175 bushels.

Soybeans: Great plant health in this field of tall, bushy beans. The canopy was 38 inches with 2.5 to 3 inches between nodes. These was some insect feeding. No disease. Pod count was fair in these 50- to 60-bushel beans.

Soybeans: These were nice looking beans with pods three-quarters of the way up the plant. The canopy was 36 inches with 2.5 inches between nodes. There were many 3-bean pods and 4 or 5 pod clusters. The beans were 50 to 60 bushels in this excellent field. There were a few Japanese beetles.

Corn: The corn looked nice. There was some low disease pressure. There was a late N application and some burnt leaves. The corn was at 182 bushels. Ears were still upright and catching some moisture and nearly at full dent.

Soybeans: These beans looked very good with a 34-inch canopy. The nodes were tight at 1 to 1.5 inches. There was almost no disease pressure in the R5, well podded, 60+-bushel beans.

Corn: Good ear fill. The corn is starting to dent. The field was excellent with a yield of 220 bushels. No bugs or disease.

Soybeans: These were tall beans! The canopy was at 48 inches. There was great plant health and almost no insect pressure. There were many 3-bean pods. Node spacing was at 3 inches in the 50- to 60-bushel field.

Corn: There was some bird damage with some mold. There was little to no pest or disease pressure other than that. There was some tip back but not much and some aborted kernels. There was surprising kernel depth and it was starting to dent. The field was excellent with a 30,000 population and yield of 191 bushels. It was 100-day corn planted May 19.

Soybeans: These beans look good. The canopy was 42 inches and node distance was 2.5 to 3 inches. There were some stem diseases showing up. No insect pressure. Mostly 3-bean pods in this 55-bushel field.

Corn: The yield here was 202 bushels. Good ear fill and color. It was consistent and fairly tall compared to other fields. The population was 32,000. There was a little GLS and 1.5-inch tip back with some aborted kernels. This corn was almost to dent. It was planted May 2.

Soybeans: These were tall beans at 39 inches with some shorter areas of the field. There were 2-inch nodes. Bean leaf beetles had done some minimal feeding. These beans are 60+ bushels at R4. They are well podded.

Corn: The color was good with a little GLS. There were no insects. It was still pollinating. This corn has a long way to go but yield came in at a promising 199 bushels.

Soybeans: The plant health in this bottom ground was good. The canopy was 23 inches. The planting date was June 19. There were 2-inch nodes. No noticeable disease. Slight insect damage. The beans were still in bloom. Yields were in the 40- to 50-bushel range in the good to fair range.

Corn: The corn was very healthy and consistent. There was a good stand with a population around 32,000. The ears were further along than we have seen and girthy. There was some gray leaf spot. There was some tip back. No pest pressure. The yield was 210 bushels.

Soybeans: There was a good canopy at 28 inches tall. The distance between nodes was 2.5 to 3. No disease. There was minimal bean leaf beetle feeding. They were at R3 with many 3-bean pods. They are still adding pods but look to be around 50 bushels.

Corn: There was no disease pressure or insect pressure. The ear fill was good. There was a significant difference in ear development based on soil types. There was good moisture here. The population was around 28,000. The two yield checks were very different at 166 and 191 bushels for an average yield of 178 bushels.

Soybeans: The canopy was at 30 inches with 3-inch node spacing. There were a lot of blooms and finger length pods near the top. These were very good beans, but were a little weedy in places. The stand was a bit thin but the plants were heavily podded. These were 50- to 60-bushel beans.