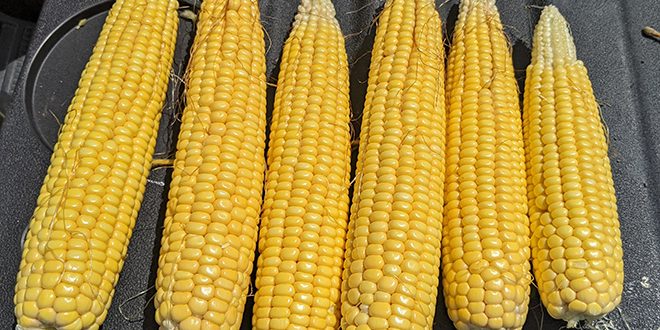 For guidelines on how to submit your own entries in the 2022 Virtual Crop Tour (and a chance to win a $250 VISA gift card), CLICK HERE. All yield checks must be submitted by 6 p.m. Aug 11. Thanks also to cooperators from Ohio State University Extension for your submissions.

These beans were planted May 10. They are in very good condition with little signs of weather-related stress or disease. There is some grass hopper feeding along the edge of the field. The canopy height is 36 to 45 inches with nodes spaced 3.5 to 4 inches in these 60+-bushel beans.

These soybeans were planted May 23. The population was 92,000 plants per acre in 15-inch rows. There is some brown leaf spot in lower canopy. There were no pests found and less than 2% defoliation. Canopy height was 42 inches and plants had an average of 62 pods per plant in this field with 60+ bushel yield potential.

This field was planted May 31. This field is typical of the soybeans in Fairfield County —planted late, and still blooming. In fact, many beans throughout the county have only reached R3 within the last week or 10 days. There are no pests or diseases. Canopy height is 31 inches. Only about half the plant is podding at this time with bloom still setting on the rest. Obviously the final yield will be largely dependent on timely rainfall in the coming weeks. Yield estimate is 40 to 50.

These beans were planted April 29. There were a couple of plants showing signs of sudden death syndrome and lot of grasshoppers, but no pod feeding yet. Canopy height was 32 inches with a node distance of 2.5 inches and consistently 3 seeds per pod. These are 60+ bushel beans.

Soybeans planted May are looking good despite the challenges of the season. This field had 50- to 60-bushel yield potential.

Soybeans look good. The plants really took off the past 45 days. The field was planted May 13. It is hard to judge since many beans are still flowering. Overall I feel better about the soybean crop. No disease pressure. The canopy height is 42 inches with 3 inches between nodes. There are 2-3 bean per pod and still flowering. Yield estimation is 50-60.

This nice-looking field was planted April 13. It was a very even stand, beans were at R5. Low insect and disease pressure. Canopy height was 48 inches with 2.5 inches between nodes and 2.6 beans per pod on average. Yield estimation: 60+.

Field is uneven, spots were replanted in middle of June. It was originally planted May 23. No disease or insect issues. Canopy Height was 36 inches, 2.4 inches between nodes and 2.5 seeds per pod. The field was at R3-R4 growth stage with 40- to 50-bushel yield potential.

This field is uneven. It was planted May 23, but spots were replanted in middle of June. Canopy height averages 36 inches with 2.4 inches between nodes. It is at R3 to R4 growth stage with a 40- to 50-bushel yield potential.

This 188-bushel corn was planted April 29. It was in very good condition. Pollination was complete and disease free.

This field was planted May 13. There is some grey leaf spot and good ear fill. The yield is 196 bushels.

This corn was planted June 3 and was not done pollinating so we are unable to make a yield estimate. There was some gray leaf spot.

This corn looks good. It was planted May 10 and is at R3. There is some bird damage, but no other pest or disease pressure. There is some tip back, but a solid yield at 216 bushels.

There were blackbirds feeding in the field during the yield checks and the damage is showing up. The no-till field was planted May 15. It is at R3-R4 with some issues filling the tips of the ears. The yield estimate is an impressive 240 bushels.

This corn looks good. There is some disease pressure, but it was sprayed last week. It was planted May 14 with 32,000 as the average population. Most ears were 12/14 around and close to 40 long. There was moderate GLS and northern, low pest pressure and ear fill was good. It was in the milk stage with an estimated yield of 215 bushels.

This field was very uniform and good stand, planted April 27. Very clean. I thought this field would be better than it was on yield estimates. Ears were short throughout the field with some tip back as well. There was no disease or insects present. Yield estimate: 136.

This field had very good population and uniform stand. It was planted May 17. This field did exhibit quite a bit of smut through the field. No insects. Tip back was in this field and impacted ear fill. The yield was 167 bushels.

A good looking field that had good population and uniform stand, planted May 17. It was clean and a good overall stand. There was minimal disease in lower canopy. A few ears were found to have earworm present. Tip back was very evident throughout. Yield estimate: 168

This field was planted late May and was in late blister stage as it recently pollinated. It has an excellent stand and population and uniform stand. It needs time and continued good growing conditions. No disease or insects. Ear fill is average and will have some tip back. The yield estimate is 156 bushels.

This May 2 planted field looks pretty good with some variability in population counts. It was reported this field had significant rain the day after it was planted that affected emergence. Clean field overall. Ear fill was average with some tip back and some limited pollination issues on some ears. The yield was 157.

Good looking field that had a population of 32,000 planted May 2. It was even in it stand, clean of disease, weed free and no signs of insects. Narrow, shorter ears (about 16 rows) on each ear. Ears were filled to tip for most part. Yield estimate: 161.

This field planted May 2 look good in terms of being clean and weed free, minimum disease in lower leaves. It was treated with fungicide. This field had an average population of 31,000. When looking at ears pulled, this field did have some pollination issues as evident by the number ears exhibiting the ear deformity we call zipper ear. There were pollination issues as several ears exhibited the zipper ear condition with spotty pollination throughout some ears. The yield estimate is 170 bushels.

The field was planted May 4 with low disease and pest pressure. The field is at R4 with a yield estimate of 179 bushels.

Corn condition and maturity is widely variable throughout Fairfield County resulting from extremely wet spring conditions that resulted in either late planted corn, or the need to replant. Unfortunately, much corn that needed to be replanted in 2022 could not be due to weather conditions that prevented it. We are in a field in the NW part of the county that typifies the average condition of much of Fairfield County’s corn. Except for several small pockets throughout the field that were drowned out early, this field has a near perfect stand of 34,000 (seed drop was 34,500), perfect weed control, and little if any symptoms of leaf disease from the ear leaf and up. Due to the wet soil conditions early, the field was not planted until May 14. It was no-tilled. This field, and much of the county, received double normal precipitation until mid-June when it got very dry for two weeks. Abundant rainfall returned in early July and continued two more weeks. For the past three weeks precipitation has been normal or slightly below on this field. Due to the delayed planting date, and stressful growing conditions the field must continue to receive timely rainfall for the next few weeks in order to reach its yield potential estimated at 154 bushels per acre. Although there is evidence of some grey leaf spot on the lower leaves, overall there is little disease pressure today. Ear fill is extremely variable. Kernel rows ranged from 12 to 18, and kernels per row ranged from 20 to 33.

This 115-day maturity corn was planted in eastern Hardin County on April 28 before all of the May rains. Like most other early planted corn in the county, it looks better than the later planted fields. There is very low disease pressure and no insect or weed issues to be concerned about. Currently the crop is in the soft dough stage. Lower stand population and some pollination stress will likely hold back the yield potential which today I estimate it at 189.6 bushel to the acre. There is some tip die back

The planting date here was April 29. There was some tip back on ears, possible due to lack of rain. There was some gray leaf spot, 5% or so of the leaf area. I found corn earworm feeding on an ear. Ear fill was good and yield estimate is 209 bushels.

This is a good overall stand, planted May 13, with a few thin spots from time to time but an average looking field for the county this year. I think over all this is the county average. I know there are some 200+ fields but we also have some that are not even tasseled yet. There is some tip back and a yield estimate of 174.96 bushels.

This field was planted May 13 in a tight widow and has excelled all season long. Timely rains provided ample moisture and relatively light insect and disease pressure has allowed this corn to coast along without any major setback or yield reduction concerns. Currently, the field is at R4, with kernels beginning to dent on the lower third of the ear. There is some light gray leaf spot and northern corn leaf blight light stink bug, Japanese beetle. Ear fill is generally complete, but there is an occasional ear with incomplete tip fill. The yield estimate is 247 bushels.

This no-till field planted May 23 looks to be running a little short on N, but overall looks good. The stand is consistently between 30,000 to 32,000. Occasionally finding northern corn leaf blight. Stink bugs, Japanese beetles and grasshoppers were our insect pests of note with occasional lep pests observed. There were some poor ears, some ears with good fill and a yield estimate of 214.

This was healthy corn, low disease pressure, but ears had some tip back. It was planted May 13 with a yield of 210 bushels.

The field was in fairly poor condition. It was planted June 3 and just competed pollination. The stand was a not consistent throughout the field. Disease pressure was low and the estimated yield is 164 bushels.

This May 21-planted corn had a consistent stand and low disease pressure. It was at R3 growth stage (milk). There was strong yield potential at 225 bushels.

The field was planted May 24. Consistent stand, but variable soil type caused variation of corn growth stage, from R2-R3. Disease pressure was low and no pest issues. Yield estimate: 189.