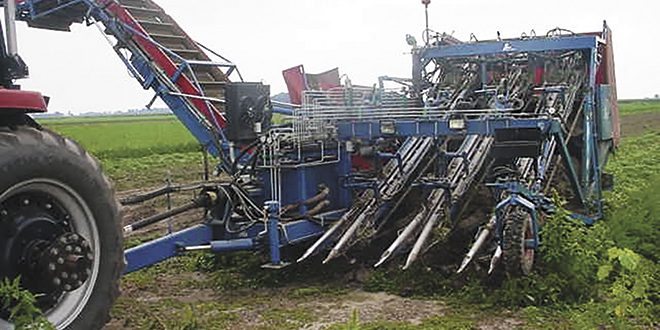 Modern carrot harvesters have sensors for row position and height, and with RTK and autosteer on the tractor, the person in the tractor can control the speed of the harvester functions.

By Dusty Sonnenberg, CCA, Field Leader, a project of the Ohio Soybean Council and soybean checkoff

With a 4-row Planet Jr. planter, Ted Baughman began growing carrots for the Campbell Soup Company on their farm in 1956. The Baughmans have been raising carrots, along with red beets, parsley and potatoes for Campbell’s in the fertile black sands south of Napoleon ever since.  Sixty-six years later, not a lot has changed according to Tom Baughman (Ted’s son).

“Dad started with a four row Planet Jr. planter and a few years later we modified it to have double-disk openers and built a 6-row planter. Once we got that working the way we wanted it, we built a 12-row planter, all with Planet Jr. units,” said Tom Baughman, owner of Tom Baughman Farms, Inc. “There are some new planter technologies out there with air pressure or vacuum systems that can do a more refined job with singulation and plant spacing. It all depends on what the objective is. For farmers that raise dicer carrots, their goal is to get 10 plants per foot, so they grow larger in size. We typically target planting 25 seeds per foot hoping for a final stand around 15 plants per foot. For our purpose, the carrots are for juice for the Campbell Soup V8 Juice and the final size doesn’t matter because they are just being squeezed to get the juice out of them.”

In the early years, the carrots were all planted following soybeans rather than corn to reduce the crop residue that was an issue during planting.

“The old shoe openers on the Planet Jr. planters did not handle some of the corn residue that was not fully broken down over the winter and the planter shoes would get plugged,” Baughman said.

Raising carrots on the sandy ground is a matter of “choosing your battles.”

“The sandy ground made it easier to dig and harvest the carrots in the summer, but the issue with the sandy soil is that without a crop residue, the sands would blow in the late fall, winter and spring,” Baughman said. “To get around that blowing sand/residue issue, wheat was planted in strips, with the ground in-between the strips tilled with a roto-tiller. The wheat strips would act as a windbreak to hold the soil, while we would take a roto-tiller and till between the strips to plant the carrots. Once the carrots were emerged, we would shift the tiller and till out the wheat. We did not have Round-up or other chemicals back then to terminate the wheat crop, so tillage was the only option.”

Another problem that arose from following soybeans was nematodes in the carrots.

“We used to have to fumigate the soil before we planted the carrots or we would have nematode issues when we followed soybeans,” Baughman. said “Once we figured that we could use a double-disc opener on the planter and plant into what had been corn ground, we no longer had nematode issues.”

Carrots have similar nutrient needs to other cash crops. Based on the soil tests, P and K are applied along with typically about 120 pounds of nitrogen.

“Our ideal planting date would be around April 1, but with changes in the weather in more recent years, it seems like we typically don’t have an opportunity to get in the fields until April 10 or April 15,” Baughman said. “The seed is very small, and it is planted very shallow relative to other seeds, generally half-inch to three-quarter-inch deep. We do not have many insect or disease issues generally. Weeds can be a challenge. When dad first started in the late 50s it was all hand labor, pulling weeds and walking the fields with hoes. Now we have chemicals and will use Treflan and Lorox herbicides along with tillage and cultivating.”

The timing of carrot harvest is based on the needs of the end user.

“In earlier years, carrot harvest would start in mid-July once Campbell’s started their V7 line for the V8 juice.  Now with changes in their production and batching schedules, we will not start harvesting until mid-August,” Baughman said. “For farmers growing dicer carrots or for other uses, it is based on when the carrots reach the desired size.”

“In the early days, we had an old one-row Scott Viner Top-Lift Harvester,” Baughman said. “Dad built a frame and put two, 1-row harvesters together so we could get more done. We still have that around and use it for red beets. We purchased our last two carrot harvesters from the Netherlands. They were both 3-row harvesters. With the old harvesters, it took one person to drive the tractor and one to run the harvester because you had to adjust the row position and height and speed as you went along. Now the new harvesters have sensors for row position and height, and with RTK and autosteer on the tractor, the person in the tractor can control the speed of the harvester functions. The cleaning tables have also changed for the better. The old harvester had a rotating metal drum that the carrots tumbled through to separate the dirt clods. The new design has a tilt table with a belt that the carrots hit and separate the dirt from the carrots. Previously all the carrots were loaded into 1,200-pound crates on a wagon, now we load in bulk directly into semis or into dump carts if the field conditions are not fit for trucks.”