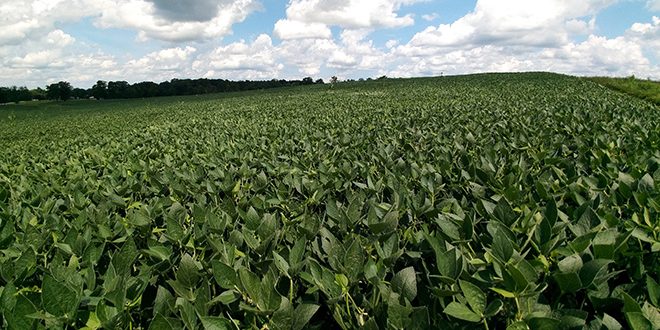 Adams County soybeans are variable due to a wide planting window, but looking good in the south. Photo by OSU Extension.

After a tough start to the growing season — from way too wet to too hot and dry — Ohio’s corn and soybeans seem to be holding their own. Genetics, good management and dedicated farmers have led to better-than-expected yield estimates considering the challenges of 2022.

In the far south, crops have fared pretty well amid the rolling hills and hollows of Adams County.

“There are a lot of late crops and variability, but the corn and soybeans look really good. I have been in corn fields almost starting to dent all the way to some that have not even tasseled yet. Some producers were actually planting double-crop soybeans and first-crop soybeans at the same time. But, for the most part we have been blessed with sufficient rainfall and heat to help the crops catch up and mature. Some of the corn in the wetter soils is starting to show a little nitrogen deficiency, but for the most part everything looks really healthy,” said Richard Purdin, Adams County ExtensionEducator, Agriculture and Natural Resources/Community Development. “I have not seen much disease pressure in corn or soybeans. I have seen just a small amount of frogeye in soybeans and a small amount of gray leaf spot and here and there some northern corn leaf blight, but not heavy. It seems like for the past 2 or 3 years we have seen southern rust come in our fields about the second or third week of August. I have been keeping my eye out for the that but so far so good, I haven’t seen any of that yet.”

This may be at least partly due to increased fungicide application in the area.

“Fungicide applications are becoming more common. More farmers are adding fungicide with their last herbicide applications and they think it is a good return on their investment,” Purdin said. “For this area we don’t see a lot of airplanes flying but we do see helicopters applying fungicide on corn. Due to the nature of our topography, airplanes don’t work too well in the smaller fields in our area.”

“The Japanese beetle population was high for a little bit but is declining. There really is not much insect pressure for corn or soybeans,” he said. “It is amazing to me that both insect and disease pressure are as low as they are with the weather we have been experiencing.”

The calendar, though, is a concern in the far south.