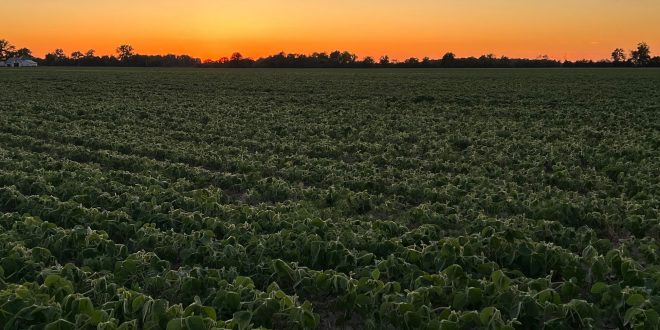 Our world depends on the sun. But you’ve probably already heard that you can get too much of a good thing. That includes exposure to sunshine. Too much time soaking in the rays can cause adverse effects, even death, in people, animals and plants. We hear time and again that without sunscreen, we can break out in freckles and suffer sunburn, which can raise our risk of skin cancer.

Mild exposure to the sun, though, can be good. It stimulates our skin to produce Vitamin D, which strengthens our immune system. Excessive exposure, on the other hand, stokes production of reactive oxygen species (ROS), also known as free oxygen radicals. With strong or prolonged sun exposure, ROS are damaging to people, animals and plants. Severe exposure can even be, I repeat, fatal.

Severe environmental conditions such as drought, excessive heat and bright sunlight can produce damaging levels of ROS in plants as well. ROS can kill plants when drought conditions are combined with prolonged exposure to intense sunlight. In one of my previous columns in Ohio’s Country Journal (January 2019) I wrote that hot environmental conditions are a major concern, but, in my opinion, not likely to lead to doomsday.

I’m intrigued by research recently published in the journal Science Advances by a team at the University of California-Riverside (UCR). Their early observations suggest that more in-depth research is needed to detect methods for ameliorating heat stress in plants.

The UCR team discovered that, at lower levels, ROS can have a positive effect in protecting plants from environmental damage caused by sunlight, drought, insects and heat stress. In their research, they used the plant Arabidopsis. When exposed to moderate, less toxic levels of sunshine, this plant produced salicylic acid, the main ingredient in aspirin. Salicylic acid, the study finds, helps the plants stand up to more intense stresses.

Apparently, many plants have, to some degree, this protective salicylic acid mechanism. The research team’s goal is to integrate this protective mechanism in other kinds of plants, specifically plants grown for food, to help them be more resilient in a changing climate. Who knows, perhaps by eating my vegetables, I wouldn’t need to take an 81-milligram aspirin tablet first thing in the morning.

The research study found that salicylic acid protects the plants by promoting photosynthesis. This is the process in which plants take in light and convert water and carbon dioxide into sugars, which provide the plants energy to grow and thrive.

I’m encouraged that maybe the findings from this study will stimulate scientists to seek other environmentally friendly proposals. For instance, alternatives to large mines in Nevada, where lithium is stripped from the ground to produce lithium-ion batteries for electric vehicles. (At the same time, there’s a dearth of charging stations for electric cars, solar panels are being installed on fertile farmland across Ohio, and the petroleum industry is regularly getting kicked in the teeth.)

Don’t misinterpret me. I am all for being environmentally friendly with new sources of technology. But let’s not dismiss the fossil fuel industry until we have the knowledge and the infrastructure in place to make new energy technologies practical. That is, in contrast to Uncle Joe’s spastic philosophy of tossing out the old staid and true then going with the new, which will require trillions of dollars and decades to develop.

I look forward to seeing the UCR research team’s next steps, which could allow plant geneticists to improve environmental crop resistance by developing more salicylic acid-producing plants. Increasing a plant’s ability to withstand sun and heat stress caused by climate change would be particularly important for food crops — to help meet the needs of the world’s growing population.

For instance, other RNA gene-edited crops, such as in potatoes and rice, with increased resistance to heat stress have demonstrated up to a 50% higher yield with no changes in other inputs.