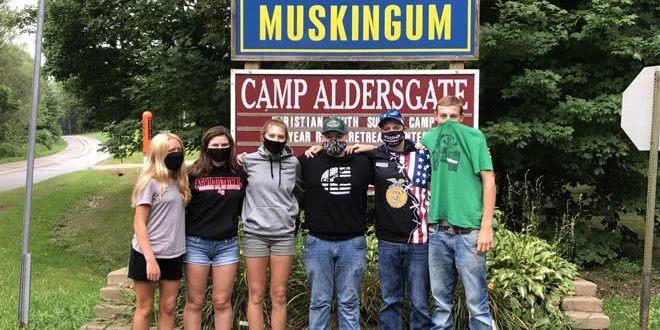 It is no secret that Ohio FFA Camp Muskingum serves those who are fortunate enough to attend in a variety of capacities. Students step out of their comfort zones, learn valuable leadership skills and are destined to try something new during their time at camp.

What most don’t realize, however, is camp also serves many who are not in attendance.
For roughly 40 years, Ohio FFA Camp Muskingum has incorporated fundraising for Nationwide Children’s Hospital into camp sessions.

If there’s one word to describe camp, it’s fun. Whether it’s water games, the dance, mealtimes or workshops, fun is always had in some capacity. It’s safe to say the same can be said for their fundraising efforts as well.

Beginning in the 1980s, the fundraiser started as the infamous pie in the eye where students who purchased ducks for one dollar would have the chance to pie someone in the face whether that be an advisor, state officer or staff member. The idea caught on quickly and soon hundreds of ducks were being sold each camp session. What started as a silly idea became a fun and exciting way to raise money for an important cause.

“I think the big thing is getting students to understand the importance of service and finding a cause they believe in,” said Todd Davis, Director of Ohio FFA Camp Muskingum. “As a society, we have to help those less fortunate than us and this is a great way to teach students the importance of that in a fun way.”

The duck fundraiser has since become a major part of every camp session. In total, camp has donated well over $300,000 to Nationwide Children’s Hospital and that number will only continue to rise.

Year after year, the summer staff continues to find new and entertaining ways to incorporate their fundraising efforts into camp.

“Camp staff started the week by explaining where the money raised from the ducks went and why Children’s Hospital is such an important cause. We then set goals for how many ducks the campers had to buy before a certain deadline to receive the reward,” said Paige Teeters, 2022 Head Summer Staffer.

The rewards varied each session ranging from slushie showers during lunch to pies and water games and even giving Joe Helterbrand, a summer staff team member, a haircut.

“Once each goal was reached, the name of one lucky camper who purchased a duck was drawn to then carry out the reward as the rest of the campers watched with excitement,” Teeters said.

Over the years, new and fun ideas to support the cause were implemented. Eventually the ideas expanded from individual student contributions to chapter-wide donations. For several years an auction took place on the last night of each camp session where chapters in attendance could purchase a variety of different items.

To be in attendance for the auction was special. Stories of families impacted by Nationwide Children’s Hospital were told, often leaving not a single dry eye in the room. It was then that students in attendance truly began to recognize the impact their donations would make.

Items donated by camp were then sold for amounts that far exceeded their face value. Cookies for the entire chapter to indulge in at the dance would sell for $300, a t-shirt signed by the state officer team for $500 and a chapter visit from the state president for even more. Some may question why chapters would pay so much for seemingly small things but the answer is simple: it was for the kids.