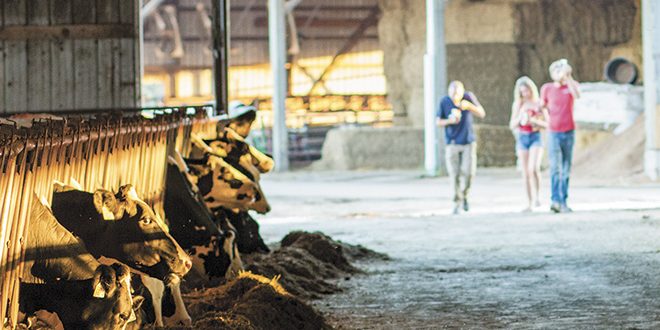 The cows were eating in the barn while teenagers on the Twilight Dairy Tour were eating ice cream right outside.

The sun was just beginning its descent as car after car pulled into a gravel driveway. Local FFA members pointed drivers toward an alfalfa field, a makeshift parking lot for a big event. A tractor with a wagon made its way down rows of cars, picking up the guests. After everyone loaded, the driver took his passengers to the top of a hill overlooking a farm.

Guests were instantly greeted by the sights and sounds of a working dairy farm. For many of the youth, and probably even some adults, it was the first time they’ve ever seen a cow up close.

The Twilight Dairy Tour is an annual event hosted by the Wayne-Ashland Dairy Service Unit, in conjunction with the Ohio State University Extension. The event aims to teach both non-farming families and fellow dairymen.

This year’s annual Dairy Twilight Tour was hosted at Falling Star Farm in Polk on July 19. Jon Miley has been a member of the Wayne-Ashland Dairy Service Unit for nearly 15 years, currently serving as the committee’s treasurer. The Wayne County dairyman said the event is a great chance for the community to get together.

“The Dairy Twilight Tour has been going on for well over 30 years now. It’s a promotional event for the dairy industry,” Miley said. “I think it’s good to get people to the farm to see where their food comes from, to see how things work, and to interact with the people who do the work. People can see that there’s more to it than just going to the store to get food.”

The event has grown and changed over the years. What started out as an event attended by 150 people with some ice cream sandwiches now includes buildings of vendors, agricultural equipment, a catered meal and more. Of course, there’s still plenty of dairy products to go around. Guests are able to grab cheese sticks, a bowl of ice cream or milk to drink as they peruse the farm. A total of 75 sponsors provided a free dinner to all attendees.
The event draws in thousands every year. This year nearly 1,500 people attended.

“We are very happy with the turnout. We don’t really have set criteria on how we select farms to host. We are just looking for good families with well-managed dairies. We have the events mostly in Wayne County but every five years we host one in Ashland County,” Miley said.

Karen and Dewey Meyer are the current owners of Falling Star Farm. The farm was originally purchased by Karen’s parents, Phillip and Shirley Kerr. Phillip was one of 10 children growing up on his family’s farm. Shirley, a self-proclaimed city girl, learned to become the “ultimate farm wife,” as described by her daughter. When Phillip left for the Army, Shirley was the one who had to milk cows. After Phillip returned home from the army, the couple decided to register their Holstein herd. They looked up at the night sky for inspiration on a farm name, thus the Falling Star Farm was born. The Kerrs bought the current farm location in December of 1962. Shirley still remembers leading the Holsteins down the road to their new home in the cold, snowy weather.

“It was December when we moved here and I can recall the first morning I had milked my hands about froze,” Kerr said.

In 1979, Karen and Dewey Meyer married and joined the farming operation with the Kerrs. The Meyers have four children who grew up on the farm and are still involved today in some capacity. Falling Star Farm presently milks 500 head of Holsteins and farms corn and hay. They also sell replacement heifers to other dairy farmers in multiple surrounding states.

In addition to the dairy, the Meyers also own and operate Meyer Hatchery and Branson Excavation. The hatchery sells over 100 different breeds of chicks and fulfills over 1,000 orders a day. The excavation company is celebrating its tenth anniversary in 2022.

“This event is important because it’s just plain good for the industry. We are bringing awareness to dairy. We work hard and we work a lot of long hours and we are very proud to show off our place,” Dewey shared.

“It’s nice to see the community support of the local businesses and the family-owned businesses too,” Meyer said.

The community support was evident during the first ever Dairy Twilight Tour benefit auction. Wheels of cheese and even a heifer were auctioned off to support a fellow dairy farmer who was diagnosed with cancer. The benefit auction raised over $5,000 to support the family.

“The Dairy Summit is still fairly new, this was only the second year doing it. We invited in folks from different industries that impact dairy farming to come and speak about the latest topics. We had around 85 people join us for the program,” Stocksdale said. “It’s a way for agribusinesses to communicate with those in production agriculture about some of the challenges and success they’re seeing.”

Topics ranged from the farmland prices to supply chain issues and more. Scott Higgins shared results from the dairy checkoff program and how dairy has been responding to the post-pandemic economy.

“The dairy checkoff was created in 1983, when at the time we had a surplus of 17 billion pounds of milk. Since then, the checkoff has been used to fund programs aimed at promoting dairy consumption and protecting the good image of dairy farmers, products and the dairy community,” Higgins said.

Since the checkoff’s inception, per-capita dairy consumption has consistently grown each year. Americans are eating 73 pounds more of dairy products today than they were nearly 40 years ago.

While the pandemic revealed some flaws in the system when foodservice outlets shut down, overall the dairy industry fared well. Today dairy farmers are faced with the same issues as most businesses, but overall things are currently positive.

“Milk production has not grown as robustly as it usually does. Issues with workforce, input costs and supply chain issues are causing some farmers to be cautious in their decision making and expansion plans. But the milk prices have grown, exceeding even 2014 levels, which is definitely welcome,” Higgins said.

In addition to the Twilight Dairy Tour, the Wayne-Ashland Dairy Service Unit supports dairy exhibitors at both county fairs, as well as provide scholarships to college students with dairy backgrounds. The unit also recognizes local dairy farms and outstanding individuals every year at their annual meeting.

“Events like the Dairy Twilight Tour provide transparency to consumers,” Higgins said. “It helps to build trust. It shows to them that dairy farmers are working hard to create wholesome, nutritious and safe products, which in turn makes consumers feel confident in their decision to buy milk at the grocery store.”