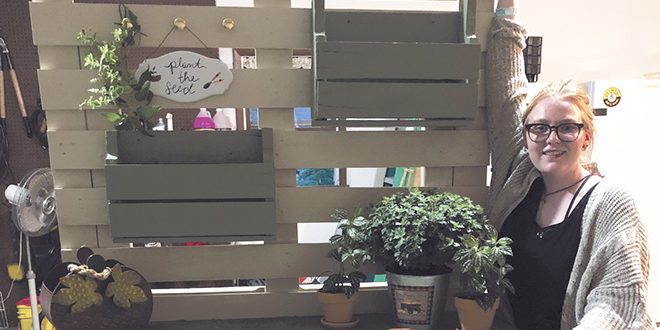 Riley Furer got to sell her project through the unique Non-livestock Sale at the Richwood Independent Fair.

There is something special about paring youth and livestock at the fair, but livestock is not necessarily a fit for every fair exhibitor. Some young people may not have the interest or ability to take livestock projects to the fair, but that does not mean they are eliminated from the learning, hard work and pursuit of excellence to produce a high-quality end product worth celebrating and supporting.

With this in mind, the late DeLynn Kale of Kale Marketing in Richwood made a push for a way to support young people involved with 4-H in the community outside of the livestock sale ring at the fair.

“DeLynn Kale had seen the wood working projects and the other different projects from these young people and he felt they needed a way to be rewarded going through a sale the same as the livestock kids. He was met with resistance for a while from the Senior Fair Board and sale committee because they felt it might take away from the livestock auction. He finally got that going in the mid-1990s. There were 8 participants in year 1, and after the first year, everyone was pretty well on board. It was a success and it didn’t have that much effect on the livestock side,” said Scott McNamee, co-chair of Junior Fair Department for the Richwood Independent Fair. “Our community has been really good about supporting the fair and supporting the kids. We put this in front of the pie and cake auction for the open class winners on Saturday afternoon. It has taken off from that first year. The most we have had has been 54 or 55 participants and the community has backed it really well. They have really rewarded those kids who are skilled with woodworking, sewing, nutrition, archery, or rockets.”

To be eligible to participant in the sale, the exhibitor must get an A on their project and not have participated in any other junior livestock auction in the county that year. All items in the sale must be at least 60% handmade, grown or in some way created by the exhibitor. Items offered for sale must be related to an exhibitor’s current year of 4-H or FFA non-livestock project.

This year the Richwood Independent Fair runs Aug 31 through Sept. 5.  The Non-livestock Sale is afternoon of Sept. 3 in the Bokescreek Pavilion.

“We’re sort of unique because we have 2 fairs in our county. We have the Union County Fair and the Richwood Independent Fair. Exhibitors can’t sell at both fairs. You can exhibit at both but you can’t take the same species to both and you can only sell at one sale,” McNamee said. “You’re only allowed to go through one sale ring one time in the county, so if they have livestock, most of them choose to sell their livestock.”

For those who do not, though, the Non-livestock Sale has been a popular, novel and fun addition to the Richwood Independent Fair.

“There have been some really unique projects. One year the Krebehenne boys made wood playground equipment, a tractor and a truck. Those sold for $2,100. The buyer turned around and donated those two items to the playground at the new school for a couple of years. Then they were moved to a local church. Kyle Krebehenne has children now so they moved that playground equipment to his house,” McNamee said. “We see things like picnic tables, bird houses and planter boxes. We have had some $3,000 or $4,000 projects go through there. There have been several really nice projects and the community really rewards them.”

Since the beginning, Johnny Regula has served as the auctioneer.

“There is usually a full crowd at the pavilion for the sale. It is standing room only to support these kids. Johnny usually interviews the kids and I have seen his face get pretty red a few times. The crowd is usually pretty entertained by his questions,” McNamee said. “In the last 4 or 5 years, we’ve had 40 to 50 projects go through the non-livestock sale each year. It has grown and has been supported really well.”