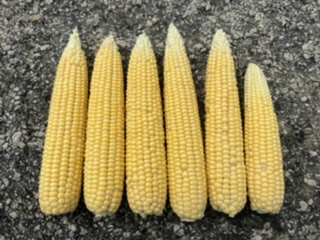 The average U.S. corn yield is forecast at 172.5 bushels per acre, down 2.9 bushels from last month’s forecast and down 4.5 bushels from last year. NASS forecasts record high yields in California, Virginia, and Wisconsin. Acres planted to corn, at 88.6 million, are down 5% from 2021. Area to be harvested for grain is forecast at 80.8 million acres, down 1% from last month and 5% less than was harvested last year. As of Aug. 28, 54% of this year’s corn crop was reported in good or excellent condition, 6 percentage points below the same time last year.

Area for soybean harvest is forecast at 86.6 million acres, down 1% from last month but less than 1% more than was harvested last year. Planted area for the nation, estimated at 87.5 million acres, is up less than 1% from last year. Soybean yields are expected to average 50.5 bushels per acre, down 1.4 bushels from last month’s forecast and down 0.9 bushel from 2021. If realized, the forecasted yields in Arkansas, Georgia, Illinois, Indiana, and Mississippi will be record high.