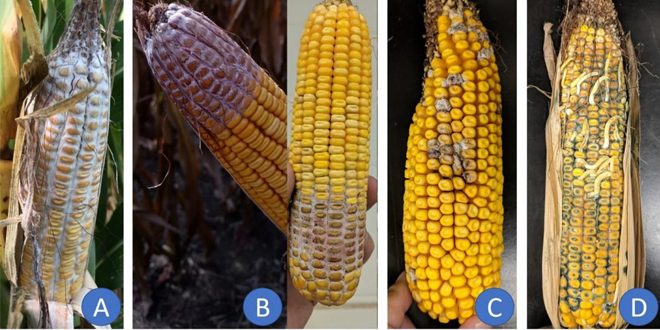 Watch for ear rots this fall

I spent some time last week walking test plots and evaluating new and experimental hybrids in eastern Indiana as well as southwest and central Ohio. Among other things, we observed ear molds developing. Pictured left is one of the ears I observed. The presence and severity of ear molds varied from one plot to another. Some locations had significant development of ear molds, other locations had none. While most hybrids did not exhibit severe conditions, in many cases where ears had tip-back and husks were pinched at the tip of the ear, the tip of the cob was soft and ear mold was just beginning to develop. Below are common ear molds of the eastern Corn Belt and their symptoms.

o Symptoms include dense white mold that starts from the base of the ear and can spread over kernels/husks
o Raised black fruiting bodies can be seen late in the season
o Favored by wet weather just after silking, can be more severe in corn planted after corn
o Does not produce mycotoxins

o Symptoms include white to pink mold that starts at the tip of the ear and grows toward the base
o Common in cool, wet weather from silking to harvest
o Can produce mycotoxins…including DON (or vomitoxin) that is toxic to livestock, especially swine
o Can produce high amounts of toxins even if symptoms are do not appear to be severe

• Ear rots may be found any year, but in some areas this year they are worse due to wet weather following silking
• Scout fields to determine if ear rots are present and identify which ones are
• Fields with ear rots should be harvested as early as possible and dried to moisture below 15% to prevent the continued development of molds
• It is not recommended grain affected by ear molds is stored, however, it should be kept separate from grain not affected if it is stored in a bin
• Any grain affected by ear rots should be tested for mycotoxins before feeding to livestock
• Although not all ear rots will produce mycotoxins, they will reduce yield, grain quality, and may cause dock fees when sold to an elevator

As harvest approaches it is important to take some time to scout for ear rots to identify the presence and severity of ear rots in order to manage them.