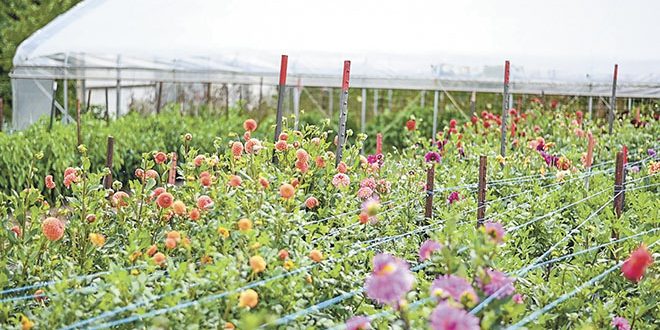 Initially, Kevin and Sarah Swope focused on beef production for the Heritage Lane Farm in Columbiana County, but over three decades the 53-acre farm has evolved into a much more diverse crop and livestock operation.

Kevin keeps 30 American bison, a small herd of American Milking Devon and Aberdeen Angus, as well as a flock of sheep. When directly marketing their products, though, they quickly learned that adding a high tunnel production system helped increase sales at farmers markets. They currently market their products at Shaker Heights Farmers Market in Cleveland on Saturday mornings.

“We started by going and just selling meat, but that doesn’t make a very attractive market stand,” Sarah said. “So I would always take a little bouquet of flowers that I had growing, and if I had any extra peppers or tomatoes, I’d put them out. We quickly realized that the flowers and the vegetables really attracted a lot of attention and a lot of customers.”

By incorporating five high tunnels into their operations, the Swopes have been able to add bok choy, chard, onions, tomatoes, ginger, turmeric, lettuces, cut flowers and other produce to their market stand offerings.

“The high tunnel production system has allowed us to produce for the early markets in the spring when others might only be able to offer things like potatoes, and it also helps us have crop available clear into that first part of December when we end our market,” Kevin said.

Kevin, who also works for the USDA Natural Resources Conservation Service (NRCS), is passionate about helping producers replicate the successes that he’s seen on his own farm.

“It’s my desire not just to promote conservation, but to keep small farms in business. Small farms are the backbone of this country,” he said. “It has been our objective to prove that a small family farm can still be economically and environmentally viable.”

The Swopes implement a number of conservation practices on the farm, from high tunnel production systems to cover crops and management intensive grazing. Kevin is eager to share his technical knowledge on high tunnels, from proper siting and drainage to soil health and micro-irrigation.

“You need to have a site that has high quality and well-functioning soils. In my opinion, the orientation of the high tunnel, whether east to west or north to south, does not matter. What does matter is shading — producers need to take into account any large trees or buildings nearby that might block the sun and prevent a high tunnel from being able to generate heat,” he said.

Kevin does utilize drainage to redirect runoff that comes from high tunnel roofs. This prevents erosion and keeps the water from pooling inside of the high tunnels. He uses a French drain system that’s backfilled with a washed gravel that he allows grass to grow over.

Carefully managing the temperature in high tunnels is important, especially in the spring and fall.

“High tunnels are not a low management system. You need to be constantly monitoring the temperature. In the winter, we’re trying to control and trying to keep as much heat in the tunnel as possible so the sides are down,” he said. “But in the summertime, when it is hot, being able to roll your side walls up allows ventilation to occur and also allows our pollinators in.”

“We use a lot of fertility and organic matter for our crops, but it needs to be balanced,” he said. “Otherwise you may run into issues such as salt build-up. We amend our high tunnels with compost and this is where siting your high tunnel where there is good drainage is also important.”

Crop rotation is also important to manage and improve nutrients and organic matter in the soil.

Micro-irrigation can also be a tricky, but necessary, component in the management of high tunnel systems. Kevin has incorporated a frost-free hydrant that can connect to a water source. He tells producers to use a sand filter if they are thinking of using a spring or pond as a water source in order to catch particulates. For those using city water, chlorine may be a concern.

Kevin uses a system from Dosatron Water Powered Dosing Technology to deliver liquid fertilizer to the plant beds, but warns that a backflow preventer is a necessary component in preventing chemical fertilizer from contaminating the water source. A pressure regulator is also important for drip irrigation to bring down water pressure from a water source. A well pump has 50 to 60 pounds of pressure and a high tunnel drip irrigation system needs around 15 pounds of pressure. The pressure regulator will lead into a main water line for the high tunnel, from which a producer can punch holes and add drip tape to irrigate rows of crops.

With all of these components running smoothly, Kevin and Sarah are able to get a large quantity and variety of produce out of the high tunnel systems on their farm.

“The mistake that I see people making is that they may not realize how many crops that they can grow in a season,” Kevin said. “We’ve already harvested bok choy or lettuce out of these beds and then we put in tomatoes. We typically run two or three crops through a bed every season.”

Since starting their Cleveland market stand in 2004, the Swopes have learned a lot and are getting to a point where the farm is financially stable.

“I don’t want to get totally into finances, but we do well where we’re getting close to doing six figures worth of sales in Cleveland,” Kevin said.

But to Kevin, the customers are what drives his passion behind the operation.

It’s taken a lot of hard work to keep the family operation going, with each member doing their part. Kevin builds and maintains the high tunnels while Sarah plans the gardens, starts the seeds and harvests. Their daughter Rebecca also helps out, arranging cut flowers into bouquets. Their son, Caleb, works at a nearby dairy farm and the two producers are now partnering to begin offering dairy products at the Cleveland farmstand. And Kevin and Sarah’s eight grandchildren are starting to get involved, including Lydia, age three, who is a pro at picking veggies.

“I think it’s a great way to raise kids. It teaches them a lot about the outdoors. It gives them a chance to be responsible and feel like they’re really contributing to what the family is doing,” Sarah said.

The farm is truly a labor of love for the Swopes. Since inheriting the farm from Sarah’s parents in 1992, they’ve worked to establish a legacy for their children and grandchildren.

“We called this Heritage Lane Farm, because it represents our family’s heritage and the agricultural heritage of the local community,” Kevin said. “I like doing what we do at the scale we do it. I’m proud of what we do, and we’ll pass that legacy along to our kids. And hopefully the grandkids learn to love agriculture as much as we do.”

Kevin has been able to utilize the NRCS Environmental Quality Incentives Program to get financial and technical assistance for the high tunnels, cover crops and management intensive grazing. He’s also permanently enrolled 40 acres into the Grassland Reserve Program which is jointly managed by the NRCS and Farm Service Agency to help private landowners protect grazing uses for 10-, 15-, 20- years or as a permanent easement.

For more from the operation, watch the video available at: https://youtu.be/C0Ma6NWm6ic.