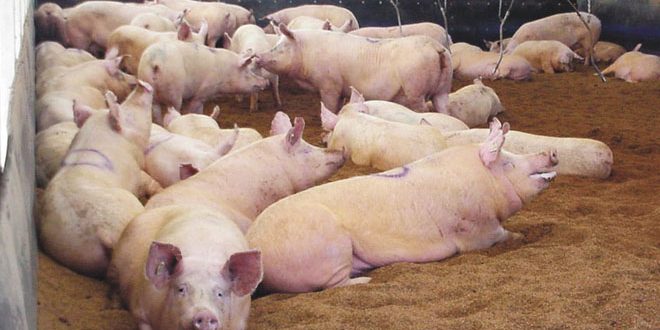 Ohioans were among the pork producers who finally got their day in court — the Supreme Court — on long awaited progress on California’s Proposition 12 in October.

Several Ohioans have been involved in various ways in the lawsuit headed up by the National Pork Producers Council.

“We had our day in court,” said Duane Stateler, a Hancock County pork producer and grain farmer who serves on the board of directors for the National Pork Producers Council. “Phil Jordan, an Ohio pork producer, was one of 12 pork producers in the courtroom. It was interesting, they said that when council made mention that there were 12 producers in the room, they noticed that all the justices were looking to try to see if they could figure out just which of the people sitting in the assembly were the pork producers. I think that was a point well taken that producers took time to come and make sure they were some of the few people allowed into the actual courtroom for the hearing. Now the Supreme Court will look at the appeal.”

The results will be announced sometime between Jan. 15 and March 15.

“Then, depending upon what they say, this will go back to the District Court in California to be heard as a case,” Stateler said. “The hope is that this will resolve the issue at that point.”

Prop 12 was approved by California voters in in 2018, but the law’s impact spreads to other states and internationally. The law sets living space standards for sows, egg-layers, and veal calves. For the pork industry, Prop 12 requires that sows must have 24 square feet or more of space. There is very little pork production in California, but the state is a huge consumer of pork and the real rub with Prop 12 is that the regulations apply to products sold in California, with fines, jail sentences and civil action in place as punishment for selling pork, eggs, or veal from animals not raised according to the standards.

“It really affected the pork industry to have 24 square feet of open pen space because that is in total contradiction to what the industry is doing in Ohio. We all remember that we made a deal with the Humane Society of the United State and Wayne Pacelle back in 2010 that set up the Ohio Livestock Care Standards Board. Through that, we determined when gestation stalls could be used, when they couldn’t be used, the size of the gestation stalls, and then going to the open pen after the sows are determined pregnant. HSUS came in and saw some of the work that Pat Hord had done. Pat was one of the first pork producers looking at changing to be in compliance — Kalmbach and Cooper Farms were right there with him. It’s amazing that in the open pen gestation that you find at about 20 square feet there’s a lot of open pen space. People don’t understand that pigs like to be close to one another. You can have a whole barn and have 20 pigs in it and they will all be probably in one or two spots all laying up against one another — that leaves a lot of open space,” Stateler said. “So, when California Prop 12 came, they decided to make it 24 square feet because they knew the industry was at 20. The unfortunate part for residents of California is the fact that, when this was passed, it was only about 2% of the pork industry that could be compliant. Today it’s up to about 3% of the industry and California consumes about 15% to 16% of all the pork consumed in the U.S. That means someone was going to be short because you just can’t turn around and get that kind of compliance that quick. That is what Prop 12 did to us as far as for pork. And it not only involves the U.S., but Canadian pork flows into California, Mexican pork goes into California and even some European Union Danish ribs go into California. It is not just an American problem. It is also an international and export problem too.”

The legalities of one state dictating requirements and regulations in other states are at the heart of the case brought to the Supreme Court of the United States (SCOTUS) by the National Pork Producers Council and the American Farm Bureau Federation.

“We knew we had a strong case. You can’t force other states to comply with something another state is doing,” Stateler said.

“The out-of-state application of Proposition 12 immediately raised concerns across the United States,” Hall said. “Several lawsuits followed, with the primary argument being that Proposition 12 violates the Commerce Clause of the U.S. Constitution, which grants Congress the authority ‘to regulate commerce with foreign nations, and among the several states, and with the Indian tribes.’ SCOTUS has long determined that implicit in the Commerce Clause is a restriction on the ability of states to pass legislation that discriminates against or excessively burdens interstate commerce, referred to as the ‘dormant Commerce Clause.’ Opponents of Proposition 12 argue that California has burdened interstate commerce by prohibiting sales of products within the state from out-of-state livestock producers who do not comply with the California state law for animal housing.”

This is not the first time this issue has been a concern.

“Federal courts disagreed with the commerce clause argument in an earlier challenge to Proposition 12, North American Meat Institute v Becerra, for which the SCOTUS declined review. Another case, Iowa Pork Producers v Bonta, also alleged Commerce Clause violations along with several other constitutional challenges, and that case is now on appeal after being dismissed by a federal district court in California,” she said. “A federal district court also dismissed the current National Pork Producers case, presented again on a Commerce Clause claim. The Ninth Circuit Court of Appeals upheld that dismissal while agreeing that the law would ‘require pervasive changes to the pork production nationwide.’ The court concluded, however, that National Pork Producers had not stated a constitutional claim by alleging that Proposition 12 discriminates against out-of-state interests. Absent a showing of discrimination, ‘a state law may require out-of-state producers to meet burdensome requirements in order to sell their products in the state without violating the dormant Commerce Clause.’ As long as the only conduct regulated by the law is conduct within California, the court explained, significant upstream effects beyond California would not violate the Commerce Clause. Last April, SCOTUS accepted the request to review the Ninth Circuit’s decision.”

In the SCOTUS review of the case, two questions are being considered.

“The first is whether the economic effects outside of California that require pervasive changes to an integrated nationwide industry state a violation of the dormant Commerce Clause. The second question is whether Proposition 12 states a Commerce Clause claim according to an earlier SCOTUS decision in Pike v. Bruce Church, which held that even when a law doesn’t discriminate on its face against interstate commerce, the law is not permissible if its burdens greatly exceed the benefits to local commerce,” Hall said. “The petitioners argue that Proposition 12 is ‘impermissibly extraterritorial’ because 99.87% of all pork sold in California comes from producers outside of the state. They claim that the practical effect of Proposition 12 is to regulate out-of-state commerce and require significant and costly changes to sow housing across the country. Proposition 12 also fails the Pike v Bruce Church balancing test because its ‘false human health rationale and philosophical preferences about conduct outside of California are outweighed by the wrenching effect the law has on interstate commerce.’”

The folks of California disagree.

“California describes the law’s impact as having only a ‘ripple effect’ both within and outside of California rather than creating an impermissible extraterritorial effect. An upstream, practical effect, California argues, is not sufficient to render a state law invalid under the Commerce Clause,” Hall said. “Claiming that the petitioners overstate the economic effects of the law, the State argues that it would not be impossible to segregate animals to meet California requirements while continuing housing requirements for other markets. California argues that ‘there is nothing illegitimate or insubstantial about the voters’ expressed purpose of addressing extreme methods of farm animal confinement and potential threats to the health and safety of California consumers.’”

Both sides of the debate around the nation are awaiting the final SCOTUS decision. Other measures similar to Prop 12 are being considered or have already passed, Stateler said.

“A Massachusetts ballot initiative came right after Prop 12 and it was passed. It was to have taken effect I think about Aug. 15 this year and it basically was the same thing. We thought it only concerned Massachusetts, but when they finally came out with the rules it was any pork that passed through Massachusetts. The states of Connecticut, Rhode Island, New Hampshire, Vermont, and Maine, all their pork channels through Massachusetts,” he said. “All of the sudden we’re looking at 3.5% of the pork supply. We got an emergency injunction completed there that put it off until after we hear from the SCOTUS case and then there is 30 days after that the judge will meet with us and those of the state of Massachusetts and set up a time frame for going forward, depending on the results,” Stateler said. “How can we produce pork for people who want bacon with their eggs in the morning or who want their pork chop? How do we meet those regulations? That is a problem for not only us but for poultry and for beef and trying to meet these compliance and regulations.”

Yost weighs in on Prop 12

The U.S. Solicitor General, one of the highest ranking officials in the Department of Justice, …