This year’s winners of the prestigious Charles Boyles Master Shepherd Award are no strangers to the betterment of the world around them. Whether it’s the quality of their chosen breed, the community in which they live, or the simple gift of a delicious apple pie, the world is undoubtedly a better place having been graced by Carroll and Marilyn Fogle.

Marilyn and her late husband Carroll are well-suited to the Master Shepherd Award — presented each year to Ohio sheep producers who have made substantial contributions to the industry through volunteer commitment and service.

“Not only have they been leaders in the Ohio sheep industry, but they’ve also been producers of very high-quality sheep for many years,” said Roger High, Executive Director of the Ohio Sheep Improvement Association and Ohio Sheep and Wool Program, which administers the award. “I’ve known the Fogle family for several decades through raising sheep and leadership activities. Both Carroll and Marilyn have been involved in leadership activities at the county level, and Carroll has been involved in leadership activities at the state level, being on the Ohio Sheep Improvement Association Board. They’ve been very active in Union County with promotional activities for both lamb, which they called the All-American Lamb Cookoff, and the wool promotion with the guys and gals lead-in at the Union County Fair.”

Marilyn now resides outside of Raymond where she tends a small flock of award-winning Border Leicester sheep with the help of her children Gregg Fogle and Whitney Gentry. Gregg serves as the manager of the Ohio State University Sheep Research Center near Wooster. Whitney, a former Ohio Lamb and Wool Queen, is community relations manager with the Adena Health System.

Though it’s all about wool these days, Marilyn said it hasn’t always been the case.

“I grew up riding horses and lived in Delaware where the Little Brown Jug was. I always wanted to be the outrider up there. I think I was a senior in high school or right after high school, they did ask me to come there and I did that for about 18 years,” she said. “I saw lots of historic races.”

“My husband and I both had horses when we got married. The kids came along and we thought we’d get a horse for them, but they were both allergic to it,” Marilyn said. “We knew Bud Westlake here in Marysville and he had good Suffolk sheep. We bought four registered Suffolk ewes for the kids for 4-H and that’s how it started.”

After a run of various breeds, shows, and plenty of organization involvement, the children moved out and so did the sheep.

“After we sold the club lambs, I told my husband I haven’t done anything for the last 30 years but take care of sheep and do chores and feed the kids. And the kids are gone, now the sheep are gone,” Marilyn said. “I was kind of interested in the Border Leicesters. I had seen them at Louisville. We got five and started with that.”

Border Leicesters are a docile, dual-purpose breed known for their long wool, as well as being featured in the 1995 hit movie Babe.

“I remember the first year we had Border Leicester sheep, we went to Maryland. I think when you show a sheep it’s a show, so they ought to look nice and ought to look clean. Well one of the ladies there said, ‘You don’t clean them up that way.’ But now they all do,” said Marilyn with a laugh. “I like them clean. I didn’t wash them, I just hosed them off and they got white. And the others were not, they just let them go. They don’t like to trim them up, but to me it’s a show so they ought to look nice.”

The judges must have thought so, too. It was in this breed where the purple banners started rolling in for the Fogles.

“My greatest success or what I’m most proud of is in 2010, we had Champion Ram and Champion Ewe in Louisville. Then in 2014, we won Champion Ewe with an ewe lamb and then the next year, 2015, she went back and was also a champion. So that was that was pretty great to have her do it two years in a row,” she said.

“We showed as kids going to the Ohio State Fair or Louisville, always wanting to chase banners,” she said. “We thought, ‘Boy, it would be nice to get a banner,’ but we never got a banner until Mom started showing Borders.”

Though their 4-H days have past, Gregg and Whitney continue to be involved in sheep in one way or another alongside their families. Both continue to help with sheep and smile when thinking about the flock’s humble beginnings.

“I think my dad said he bought them on a Tuesday or a Thursday, got them sheared on a Saturday, and some of them lambed by the following week, and he thought, ‘Well, there’s nothing to this.’ Then they took that group of sheep to Producers Livestock, sold them, and went to Westlake’s and bought four registered Suffolk ewes. It all went downhill from there,” Gregg said with a smile.

Whitney said the support from their parents and the lessons learned along the way have followed them throughout their lives.

“Dad would always say it costs just as much to feed a good sheep as it does a bad one, so we might as well have some good ones,” she said. “So that’s what we tried to do, and he was always supportive when we’d come out of the ring.

“The one thing that we did was enjoy those successes as a family and we still do. Mom is almost 83 years old and we’re getting ready to go to Louisville and hoping to do well but also have a good time and make some memories. And I think that was a lot of Dad’s focus too. He just enjoyed life and liked to make memories with people.”

Their love for helping others stands out to many friends around the Ohio sheep world. Mark McCabe is one of those individuals.

“We’ve known Carroll and Marilyn our entire sheep life. When we moved over here, my daughter decided she wanted market lambs. We didn’t know much about them and the Fogle family jumped in and helped us,” McCabe said. “They helped us with market lambs, they helped us with the sheep lead that my daughter participated in, they helped us get ewes bred, they helped us go to shows — they were just very, very helpful. They were always successful in the showring with their Suffolks and later with their Border Leicesters. They’ve helped numerous families to get started in the sheep business. They’re just very, very nice, helpful people.

“We know that Carroll has passed on, however, his legacy will last forever and how they helped and established other breeders. But Marilyn continues to breed successful Border Leicesters and she continues to help people and give them a piece of pie. We wish her a healthy, successful future.”

Ohio sheep producer Tim Barnes, a former Master Shepherd Award winner himself, recalls Carroll as a helpful man with a way to make others feel at ease, with several stories helping to show his helpful nature.

“They’re just tremendously good individuals,” Barnes said. “Anybody who is familiar with the big show arena in the Brown Sheep Barn at the Ohio State Fair, we have the announcers stand. There were steps with that originally that kind of deteriorated over time and somebody made a comment they were going to fall and hurt themselves if we didn’t get new steps made. Lo and behold the following year, Carroll comes in with nice hardwood steps that fit perfectly to make it safer for people to walk into the announcers stand, so we surely thank him for that.”

Barnes recalls the beginnings of the Charles Boyles Master Shepherd Award, started by Ralph Grimshaw, among others, to recognize Boyles himself, as well as others for their work.

“It was made to recognize the outstanding people in the sheep industry in Ohio and the contributions they have made to the industry,” he said. “The Fogles obviously fit in that mold just perfectly by making people feel better, but above that also promote the lamb, the wool, and the sheep industry.”

The honor and meaning of the award, given each year as a surprise to the recipients, carries great weight for their parents, according to Gregg and Whitney.

“I’m sure they’re very honored and that my mom is very honored with somebody like Charlie Boyles who was very well respected as a leader in the sheep industry — somebody that stepped up and created a lot of interest for a lot of Extension activities and those were things that they would be tickled about,” said Gregg.

Whitney recalled that, though her father passed away in 2019, his memory lives on as his name is added to the distinguished list of winners.

“He’d be really honored to be here and would be appreciative to be with the list of past recipients,” Whitney said. “People like Warren Squires, Tom Brown, Mike Stitzlein, Bruce Achor, and all the other folks that are listed. They are people that they were friends with and made memories with. We’re very honored to have them included on that list.” 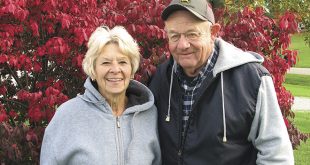 A tradition of sheep, a legacy of stewardship 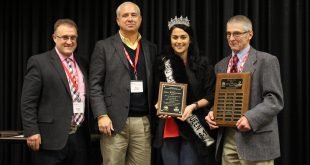 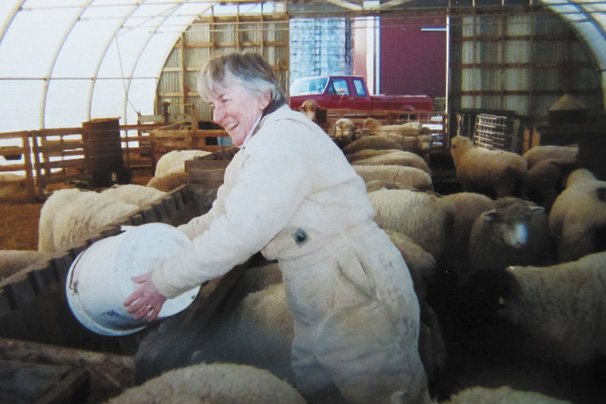 It isn’t very often that a successful farm story begins off of the farm, but …