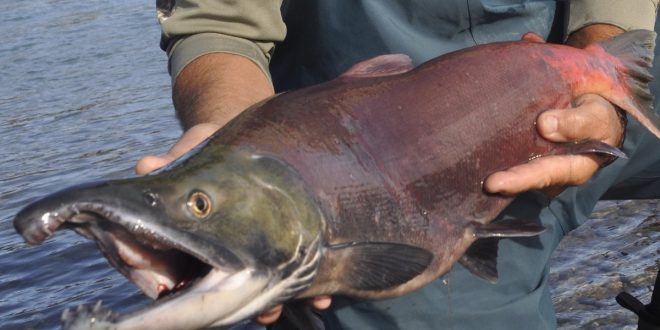 The Cuyahoga River has been stocked with about 1,000 rainbow trout. That’s amazing when you consider that the northeast Ohio flow was once a national punchline for water pollution, catching on fire in 1969. Since then, the river has made a comeback for recreational users and wildlife — such as trout — alike.

The trout release was a combined effort by the Ohio Department of Natural Resources (ODNR), the Western Reserve chapter of Trout Unlimited and the city of Cuyahoga Falls.

“This is unprecedented. I don’t know that this has ever happened in the river so now it’s stocked,” said Don Walters, Cuyahoga Falls Mayor.

Jason Pullin, recreation program manager for the city, said the conditions were perfect for a release that would seem unthinkable not long ago.

“Trout typically live in cold water, but it has to be very clean. It has to have a high level of oxygen so the reason they release trout now is as fall comes in, the temperatures of the air and river get a little cooler,” Pullin said.

“Trout will live in super clean waters now and they’re elusive, so the trout that we released, they’re not all gonna’ get caught this year. They’re gonna’ grow and they’re going to be there,” Walters said.

With some of the most diverse career opportunities in state government, the Ohio Department of Natural Resources (ODNR) is inviting college students to apply for the next round of summer internships.  Students throughout the state can apply for a 2023 internship through Dec. 9.

“Young people bring fresh ideas and new perspectives to each and every division at ODNR,” said Mary Mertz, ODNR Director. “Several of our staff began their career at the agency as interns and we hope to educate and inspire even more students in this next class to join our team and contribute to the ultimate goal of protecting and preserving our natural resources.”

ODNR expects to hire 60 interns covering a variety of fields including biology, communications, engineering, forestry, geology, law enforcement, recreation, water quality, wildlife, and more. Those selected will join a passionate team of employees and apply knowledge learned in the classroom to real-world scenarios. Interns will have the opportunity to further develop sought-after skills through specialized professional development trainings.

Eligible applicants must be enrolled as a part-time or full-time student at an accredited college, university, or community college which offers or leads to an associate, bachelor, or graduate degree, and be in good academic standing. To learn more about ODNR’s Summer Internship Program and read testimonials from previous interns visit odnr.gov.

Moxley Wildlife Area, located in Erie County, recently expanded by 99 acres thanks to a donation by Ducks Unlimited. The wetland habitat is known as Dinky Marsh and increases the existing public wetland complex along Sandusky Bay.

The new parcel lies just west of Moxley Wildlife Area between State Route 2 and Barrett Road. The land is comprised of hemi-marsh, roughly equal parts emergent vegetation and water. The Division of Wildlife’s acquisition of Dinky Marsh secures the property as wildlife habitat in perpetuity, a vital step toward restoring and conserving remaining wetlands along Lake Erie. Conservation of the wetland contributes to Governor DeWine’s H2Ohio project goal of improving the state’s water quality through wetland restoration.

The expanded Moxley Wildlife Area provides habitat for bald eagles, waterfowl, wading birds, and shorebirds, as well as river otters and muskrats. Amphibians, reptiles, insects, fish, and more benefit from the wetlands as well. As a popular stopover for migrating waterfowl, the new marsh will provide access via controlled hunts.

Moxley Wildlife Area is a 290-acre public property located 3 miles northwest of Sandusky. Its proximity to Sandusky Bay means it is an important barrier to pollutants entering the lake. The wetland is the site of an H2Ohio project to construct a fish passage and water control structure which will allow free water exchange between the marsh and Sandusky Bay. That project enables the wetland to function as intended and filter out nutrients before they reach the bay.

Fourteen Ohio veterans recently were treated to a guided archery hunt at Zaleski State Forest by the ODNR’s  divisions of Forestry, Wildlife, and Parks and Watercraft, who partnered with the Buckeye Hero Hunt Committee to provide the opportunity to hunt white-tailed deer.

“This was a great weekend spent with some outstanding people,” Chief of the Division of Forestry Dan Balser said. “ODNR is honored to be able to provide this opportunity as we thank and support the men and women who have served our country.”

Veterans who applied to participate attended the event free of charge. Volunteers assisted the Buckeye Hero Hunt Committee to support the veterans with their hunt and provide meals, lodging, and equipment. Nine deer were harvested between Oct. 14 and Oct. 16.

“We are pleased to partner with the Buckeye Hero Hunt Committee and its volunteers to honor our veterans,” Zaleski State Forest Manager Courtney Cawood said. “Many lifelong memories and friendships were made over the weekend and the comradery was felt by all present.”