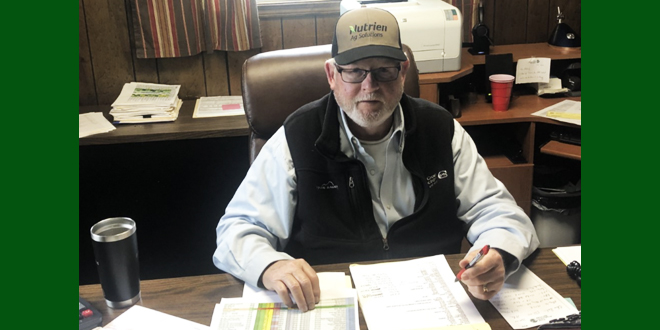 Gower leaving a legacy of excellence in Ansonia

Darrell Gower, manager of the Ansonia Nutrien Ag Solutions facility, will start the new year by celebrating his 35th anniversary with Nutrien and legacy companies while gearing up for his next adventure — retirement.

“In today’s world, it’s rare to find someone who has been working in the same place for over 30 years,” said Steve Emery, Southern Ohio Division Manager. “The fact that Darrell has been in his position at the Ansonia branch for 35 years speaks volumes about the value of his leadership to his employees, peers, and suppliers. Darrell consistently delivers successful results and is held in the highest regard by those he works with.”

Gower’s passion for agriculture runs deep in his veins — his parents, grandparents, and uncles were all farmers, and growing up on his family farm, he got to experience the agriculture industry from an early age.

“When I would get home from school, I’d always help on the farm. That time working on the farm made me realize at a young age that I wanted to be a farmer,” Gower said.

In January 1989, Darrell was offered a position as an assistant manager at what is now known as the Nutrien Ag Solutions Ansonia branch. At the time, it was owned by Mid-Ohio Chemical, and it had been closed for a year before the company purchased it and began operations.

“To think that when we started working in this facility, we were starting from scratch and had zero business,” Gower said. “And then fast forward to today, where we’re doing several million dollars’ worth of business — it’s amazing to have experienced and been part of growing that business.”

Two and half years later, Gower became the manager, a position he still proudly holds today.

Larry Campbell has been a local grower for 50 years and has been a customer of Gower’s from the very beginning.

“Darrell knows every rock and corner post in the two counties he serves. It doesn’t matter if you own five acres or 5,000 acres, he treats everyone the same,” Campbell said. “Having Darrell in my corner, keeping me up to date on chemical and seed guidelines, has made me a better farmer.”

As a salesperson and facility manager, every day is different for Gower. Overseeing the plant’s day-to-day operations, Gower finds himself conducting the orchestra that is the Ansonia branch — checking equipment, organizing custom applications and dry fertilizer spreading for customers, and talking with customers who visit the location to place their orders in person.

Under his leadership, the plant has been in the President’s Club and Executive’s Club for several years.

“I never dreamt that I would be working for the same business for 35 years, but I love my job and love working with the customers and employees here,” Gower said. “I’ve seen three generations of family farmers come through these doors to work with us and it really does feel like our branch is one big family when we get to see our original customers’ children and grandchildren continue to keep their agriculture legacy going.”

One of the families Gower has seen grow over the years was the Rowland family. Scott Rowland and his three sons have been farming for over 40 years and Scott has been a Nutrien Ag Solutions customer since the Ansonia branch opened in 1989, eventually becoming a truck supplier for the company in 1991.

“Darrell is an awesome guy. It’s truly been an honor to work with him and call him my friend,” Rowland said. “He always puts his staff first and has the farmer’s heart in mind. I could call Darrell anytime and knew that he would give me tremendous recommendations to get the best yield.”

When Gower clocks out of Nutrien, his job for the day may be over, but a new workday begins. For the past 35 years, he has continued to run his family’s farm alongside his fulltime Nutrien job — officially buying the operations in 2007 from his parents.

When Gower retires from Nutrien, he’s looking forward to doing the typical retirement activities such as traveling with his wife, spending more time on his hobbies .and running a farm full-time. Now, Gower will have some helping hands on the farm — his son and grandchildren. The family will work together to continue its history of producing corn and soybeans.

“The biggest piece of advice I can give is to surround yourself with good people and treat them the way you would want to be treated,” Gower said. “To make a business like this, you have to have good people behind you. I had some of the best folks behind me, Nutrien has been a great company to work for and I know Ansonia will be in good hands.”