Can you ID the donkey here?

The holiday weekend was filled with farm fun. We unloaded hay, cleaned the chicken coop and on Saturday morning trimmed donkey hooves. This was my first experience trimming hooves and it was rough. I was kicked, bitten and stepped on numerous times while we trimmed this donkey at my house and six others at other area farms. My friend Chad said he would teach me how to trim hooves if I helped him. I think I had the rougher end of the deal. I also recently discovered that more people are killed annually by donkeys, on average, then die in plane crashes.
At any rate, I complained enough about my various injuries from the experience that my wife was not sure who the real donkey was in this photo. 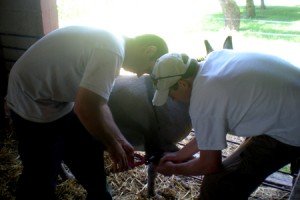 END_OF_DOCUMENT_TOKEN_TO_BE_REPLACED

We have had a lot of great comments since I posted Lori’s tale in “Moon over Licking County” from others who have had run-ins with HSUS paid signature gatherers. I have heard about incidents at the Department of Motor Vehicles in Fairfield County, public libraries, gas stations and even the Bellevue Community Days festival. Police were called in some cases, but there have been no arrests and only civil (though sometimes heated) confrontations. Thanks for standing up for what is right in your communities and for all of your great stories (see some below). Unfortunately, it sounds as if HSUS has probably gotten their necessary number of signatures for an issue on the November ballot.

So this time it is not a second hand story. I was approached today – Friday, June 25 – at the Mt. Gilead, Ohio Kroger Fuel Pump by an HSUS signature collector.… Continue reading

END_OF_DOCUMENT_TOKEN_TO_BE_REPLACED

We were at the Outer Banks for a family trip over the weekend which, I learned, is abbreviated OBX by those in the know. We got to go to the beach and fly kites near Kitty Hawk, NC. Here are some photos. 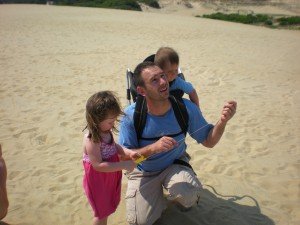 END_OF_DOCUMENT_TOKEN_TO_BE_REPLACED

The moon was out just after mid-day in Licking County last month after Lori Lawrence, an OCJ marketing specialist, confronted some signature gatherers at a Licking County Kroger.

Lori was leaving the store after getting some groceries when she spotted the two male 20-something paid signature gatherers roaming the parking lot. They were trying to drum up support for the Humane Society of the United States (HSUS) ballot measure this fall.

The group needs 402,275 valid signatures by June 29, which means they will likely need over 500,000 actual signatures, to have enough legitimate names on the list to get their measure on the ballot in Ohio. The group was off to a surprisingly slow start earlier this spring with signature numbers that were far below what HSUS was hoping for.

To remedy the problem, HSUS sued the state of Ohio over a statute that was written to make sure only Ohioans could gather signatures to change state laws.… Continue reading

December 6, 2021 -- Temps will be on the decline today. We will be well below normal by tonight and stay very chilly tomorrow into early Wednesday...
More from Chief Meteorologist Ryan Martin