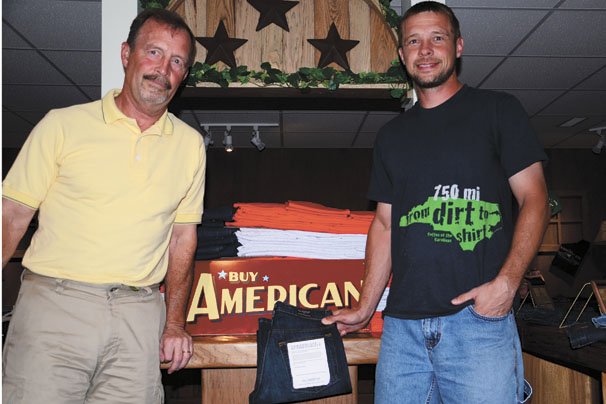 Blue jeans are often considered to be in the same category as apple pie and baseball — all American. For many years, that was the case. Blue jeans originated in the U.S.A. and El Paso, Texas was considered by many to be the “blue jean capital” of the world.

That started to change, however, about 20 years ago. When blue jean giant Levi’s Strauss closed it’s last U.S. production facility in 2003 to use vastly cheaper labor overseas, the writing on the wall seemed clear — American made blue jeans were a thing of the past.

The massive shift to foreign labor for blue jeans put Lawson Nickol in an uncomfortable position. The Darke County native worked as a sales manager for an American made blue jean company but he simply could not stomach selling this American staple after his company started to outsource labor from Mexico.

Lawson turned in his resignation and, with his son B.J.… Continue reading

END_OF_DOCUMENT_TOKEN_TO_BE_REPLACED

September 21, 2021 -- Rains today initially move from south to north across the state ahead of the cold front, but that front moves in this midday and afternoon, sweeping through from west to east....
More from Chief Meteorologist Ryan Martin