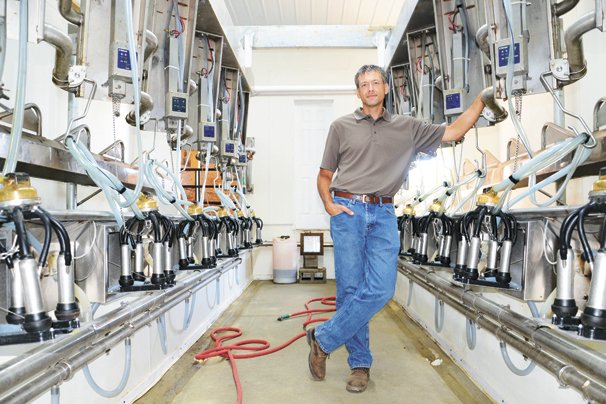 The recent addition of the Double 7 Herringbone milking parlor have helped Kyle with milking on the farm.

Sharp family making an impact both on and off the farm

There is little doubt that the Sharp family of Fairfield County has made a tremendous impact in Ohio agriculture off of the farm.

Don influenced the lives of countless young people as a 4-H Extension agent for 11 years, coach, and school board member. His sons Scott, Adam and Kyle have also been very involved in serving Ohio agriculture. Kyle was formerly the editor of “Ohio’s Country Journal” and teaches agricultural and writing courses at Ohio State University and Ohio Christian University. Adam serves as the Ohio Farm Bureau vice president for public policy and Scott is an area ag-ed teacher. While these men clearly have a passion for serving agriculture in many ways off of the farm, they also work together to carry on the family tradition of producing food from the land on their Fairfield County grass-based organic dairy farm that is this year’s Ohio Dairy Producers Association Environmental Steward Award winner.

Don’s father purchased the farm in 1947 and started milking cows soon after. In 1967 they added a three-unit milking parlor on the top of a hill surrounded by rolling pastures.

“When grandpa built that, it was fine. That is how things were done, but dad and Kyle knew the facilities needed a major update, so a lot has changed in the last few years around here,” Adam said.

Through the years, the hilltop landscape has offered environmental challenges with the potential for run-off from the cattle manure into nearby streams. To address this challenge, the Sharps, with the help of Dave Libben, Natural Resources Conservation Service District Conservationist, have taken great steps to keep the manure (and the nutrients it contains) on the farm and out of the water.

The farm’s water management strategy capitalizes on the topography of the hilltop milking facility and uses a u-shaped waterway that wraps around the building. The newly refurbished building collects all rain water and funnels it into the waterway that forces the run-off to take the very scenic route away from the steep hillside at the front of the barn and down and much more gradual and gently sloping course to a distant creek. Any nutrients and sediment in the runoff are captured in the vegetation of the waterway. Water quality tests conducted as the water leaves the farm clearly demonstrate how effective the system is at removing any nutrients and sediment from the water.

The Sharps also added a combination manure storage and winter pen pack structure that allows confinement of the cows for up to 120 days when needed in the winter months, though the cows are on pasture whenever possible. This structure provides adequate storage of manure to eliminate the need for spreading in the winter months and keeps the cows off the pasture when it is not suitable for grazing.

“We tried to eliminate any rain water coming down on standing manure,” Don said.

They have also installed a settling basin and filter strip to treat the milk house water. Rather than running down the steep hill to a creek, any waste water is piped directly from the milk house into the settling basin where the liquids are filtered off into a wetland area that ties directly into the u-shaped waterway that collects every drop of water that falls on or in the facility.

The recent addition of the Double 7 Herringbone milking parlor with auto take-off added a key component to the water management strategy for the farm and it also made some tremendous changes for efficiency. After suffering from health issues that limited his ability to continue milking, Don had to decide what to do about the future of the dairy farm and its aging 1967 facility. As Don’s condition worsened, Kyle made the decision last year to take over the full-time (and then some) duty of milking the 75 cows twice every day.

With just few days of operation in the new parlor, Kyle had already seen huge improvements with the 14-unit facility that replaced the three-unit facility.

Kyle currently milks 88 head of Jersey and Holstein cows which graze in 14 small paddocks that cover 70 acres of pasture.

“They are generally moved every day, but it has rained so much we have been able to leave them in for two or three days this year,” Don said. “We have been rotationally grazing for around 30 years. They are fed outside before they go in for milking now and then they go back out onto the pasture.”

The Sharps have constructed livestock access roads and watering systems to make the rotational grazing system work more efficiently and provide the cattle access to water without going back to the barn. They have also added stream and creek exclusion fences built from locust wood from the farm, and paired the fencing with riparian filter strips.

Since 2006, the farm has been certified organic and the milk is marketed through Organic Valley, a farmer-owned cooperative based in Wisconsin. The transition to organic was not really too tough for the dairy that has long been grass based.

“Things really didn’t change that much,” Don said. “We had to quit using antibiotics, but we really hadn’t been using them all that much anyway. Now, if we get a cow with a bad quarter, we just have to milk her separately, let her go dry and hope she is maybe better when she comes fresh again.”

The premium associated with the organic production has helped fund the environmental improvement projects on the farm and the new milking facility.

“We will typically see an extra $10 or $12 or so per hundredweight,” Don said. “That really helped when

The Sharps also produce nearly all of their own feed. Kyle makes hay on certified organic ground and they also grow some spelt, oats and corn. In addition, they have been feeding the spent brewing grain from a nearby organic brewery. The brewery needed a place to get rid of the spent grain and it works well to supplement the feed needs on the dairy farm.

“We pick it up there and feed it as soon as we get it,” Don said. “We get 1,500 pounds once a week or so and they are planning on doubling their brewing capacity.”

Kyle is now the third generation milking on the farm. Scott and Adam handle crop production on the total 500 acres of the farm, 196 of which are certified organic.

The farm regularly hosts tours to educate various groups, including new employees of Natural Resources Conservation Service for orientation. The measures the Sharps have taken to improve the situation on their farm, in turn, come full circle to bring real relevance to the great agricultural work the family has been so well known for off of the farm.