Most discussions involving soybean yield and health typically center on the plant health. The DNA of the soybean microbiome is rarely a discussion point among farmers. That could be changing in the future as more emphasis is placed on raising cover crops and the potential benefit to soybean yields. Research funded by the Ohio Soybean check-off is being conducted to evaluate the impact from cover crops on the soil life. One such project focuses on the understanding of winter cover crops in a corn-soybean rotation, with emphasis on the soil microbiome and the resulting benefits to soybean health and yield.

A research study, identifying specific fungi associated with the soil microbiome is ongoing to measuring changes at numerous points during the specific crop rotations.

“The DNA of the fungi in the soil is analyzed,” said Soledad Benitez Ponce, Assistant professor, Phytobacteriology at The Ohio State University. “We can identify which fungi are there at each time point in the soil. We get an idea of which are most abundant and which are least abundant of the different species of fungi present at different times in the microbiome.”

The identification and measurement of the fungi is very specific.

“As we measure changes in the fungal community, we are using a DNA based approach and extracting all the nucleic acids that are present in our soil sample, and then we use a sequencing technology to identify the specific group of fungi found in the soil,” Benitez Ponce said. “We can get a list of names of fungi that we have at different time points, and we can see which fungi are there at each time point, and which are most abundant and which are least abundant. As we look at the difference over time, we see there are different species that are present in one time point versus another time point.”

Looking to the future, the research will be expanding to include information from other species of cover crops and expanded crop rotations.

“We are modifying the objective slightly, and switching to different field locations to look at long term rotation experiments,” Benitez Ponce said. “We will be partnering with Dr. Laura Lindsey’s long term rotation field experiment, and incorporating cover crops with two year versus three-year rotations in two field types. We added rye to the corn-soybean rotation, (corn-rye-soybean) and we added clover to an expanded rotation of corn-rye-soybeans, then wheat-clover-corn. We will be focusing on these long-term experiments across two locations.”

“Right now, we are trying to get a better understanding of the species that are commonly used,” Benitez Ponce said. “By working with Dr. Lindsey, she has a great understanding of the species that are being used, and what works. We are trying to understand the impact of those common cover crop species to the microbiome and promote that. Learning about other species would be interesting going forward.”

Additional research is looking at the fungal communities associated with the cyst of soybean cyst nematode (SCN).

There is similar research being conducted in this area across the country. 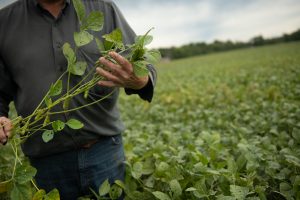 A project is being conducted working with the diagnostic clinic at Ohio State to identify the fungi associated with different levels of SCN in soil. We have about 100 samples that have been submitted to the lab from across Ohio. Those samples have a known level of nematode infestation. We are in the process of characterizing the communities of fungi present within those SCN samples. We might see some relationship in the presence in different groups of fungi and the level of nematodes in the field,” Benitez Ponce said.“The next step is to look directly at the fungi within the cyst. We are collecting the cysts directly from the field, and extracting the DNA of the cyst to characterize only the fungi that are present and associated with the cyst itself.”

A separate and independent project looked at the fungi that were able to be cultured out of a cyst.

“This project was looking at the fungi instead of looking at the DNA. Many of the fungi collected were of a species of fusarium that is very similar to the species that cause sudden death syndrome. There were not any causal experiments conducted, but there may be a relationship. We hope to continue to explore the relationship between the cyst of the SCN and other fungi,” Benitez Ponce said.